Apple this morning unveiled an artistic multi-colored barrier around its forthcoming location in Edinburgh, Scotland, signaling that it will soon open its first store in the country's capital city, reports the Edinburgh Evening News (via ifoAppleStore). 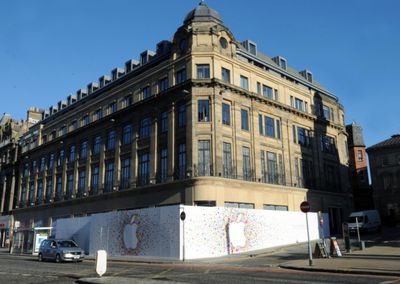 The store will be located on the historic Princes Street, with inside sources saying that the location's opening is "imminent." Based on the similar patterns of the Madrid Apple Store before its opening, ifoAppleStore's Gary Allen believes that the location could open on August 2nd.

The Princes Street store will also join Apple's other locations in Scotland, which include the existing Braehead store and the company's Buchanan Street location in Glasgow. The new location will also be Apple's 38th in the United Kingdom since the company first opened a shop on London's Regent Street in 2004.

GoneDrinkin
Their 38th store in the UK?

Open one in the Republic of Ireland!
Score: 4 Votes (Like | Disagree)

cclloyd
I just captured Edinburgh in Civ 5. I own this store.
Score: 3 Votes (Like | Disagree)

Open one in the Republic of Ireland!


Absolutely agree ! With all that cash we launder for them it wouldn't hurt to leave a few behind #

Only one on the whole island is Belfast ! They should be taking advantage of wobbly Microsoft situation with no more Xp and dodgy 8.1

Two in Glasgow and one in Aberdeen? You'd have thought Princes Street would have been their #1 go to location in Scotland.

Open one in the Republic of Ireland!

How odd. Is there a reason that there's not a store in Dublin?
Score: 3 Votes (Like | Disagree)

moxxey
I seriously can't believe how long it's taken for Apple to announce a store in Edinburgh.

I remember being up there in 2001, as a student, around the same time as Apple announced their first US store, and the local Edinburgh resellers thought an Edinburgh store would be 'imminent'.....13 years ago :)

In fact, one of the biggest resellers was reluctant to move to a bigger store, simply as they feared this imminent official Apple Edinburgh store!
Score: 2 Votes (Like | Disagree)

amt2002
Finally! An Edinburgh store has been a long time coming!

Now I will never have to visit Glasgow ever again ;-)
Score: 2 Votes (Like | Disagree)
Read All Comments