Apple's in-house advertisements are scoring lower than those created by TBWA\Media Arts Labs, a unit of Apple's longtime ad partner TBWA\Chiat\Day, according to Ace Metrix ad-watching data compiled by Bloomberg. 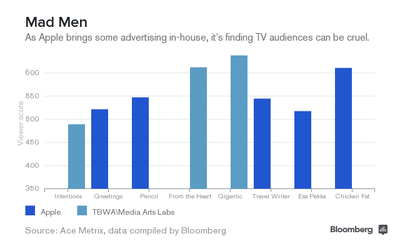 So far, ads made by the in-house team have received a cooler reception from viewers on average than those made by the agency. Ace Metrix gathers data from hundreds of TV watchers to discern how persuasive and entertaining an ad is.

"Chicken Fat" is the Apple in-house team's biggest ad success so far, scoring a 611 from Ace Metrix. However, the ad scored lower than two Media Arts ads, "From the Heart" and "Gigantic", since late last year. "Gigantic" is Apple's highest scoring ad since late last year. The highest ever score for an Apple ad was 696 for a 2010 FaceTime commercial.


The lowest scoring ads for Apple include its "Your Verse" campaign, showing off how people are using their iPads in various parts of the world doing different activities, like traveling the world, climbing mountains or directing a Bollywood dance number. None of those ads scored higher than a 600 in Ace Metrix's scale.

Comparatively, Samsung and its agency have had better luck, netting a 739 score for a Samsung Galaxy S5 commercial showing the water-proof phone being used during a water fight. The ad is the second Galaxy ad to top the 700 mark for Ace Metrix.

Rob Siltanen, an advertising consultant who wrote the ad copy for "Here's to the crazy ones" told Bloomberg that Apple's struggles may be coming from trying too hard to represent themselves.

"The hardest ads I've ever worked on were ads for myself," Siltanen says. "There's a truism out there that applies: 'The lawyer who represents himself in court has an idiot for a client.' It's very hard to have the necessary perspective to do the job right."

Alternatively, Boston University ad professor Edward Boches says Apple could be struggling selling itself as a leading company and may be more comfortable playing off other companies, like Microsoft.

Apple has found it difficult to find its footing with advertising recently, expanding marketing efforts and creating its 1,000 person in-house ad team in recent months. While the Cupertino company has taken greater efforts to control its advertising, it is still collaborating with TBWA\Media Arts Labs.

Burger Thing
Kick out the in house Ad-Team, employ more software engineers and use the facilities to develop Pro-Software and stick to your legacy :apple:
Score: 10 Votes (Like | Disagree)

kas23
I'm thoroughly unimpressed with Apple's in-house advertising people. This "chicken fat" song is disgusting. I don't care if it has nothing to do with "chicken fat" but the song is just a turn-off. Second, the "what would your verse" narrator, whoever he may be, sounds like he's about to die. Just a very grating, unpleasant voice. I don't know what they were thinking.
Score: 10 Votes (Like | Disagree)

Chocolatemilty
I find this really interesting, because even though I own quite a few Apple products, I don't consider myself an Apple fanboy. I really like all the major mobile and PC players and am well-versed in all of them. However, I feel the "Verse" campaign is quite compelling. Of course, I am biased being a music graduate student, but Esa-Pekka Salonen's commercial is quite remarkable. When the initial Your Verse commercial first premiered, I felt it was the most compelling Apple ad in some time. I guess not all felt the same. What Apple is most likely counting on is all of their different ads resonating with different factions of people instead of one with all.
Score: 9 Votes (Like | Disagree)

AngerDanger
Don't be too hard on yourself, Apple, I'm just happy when I see a commercial from you that doesn't feature the condescending Genius guy.

(it's fun to give immensely successful companies consolation messages from the comfort of my chair)
Score: 9 Votes (Like | Disagree)

SchneiderMan
Nothing will ever match up to Apple's old Mac vs PC ad campaign.
Score: 7 Votes (Like | Disagree)

Really, "Gigantic" rated that high? I couldn't stand that commercial for one reason: the music. that irritating refrain over and over again. I'm so glad they don't play it anymore, because I was at the point of muting the TV when it came on and occasionally changing the channel.

Not to mention, the actual song is about large black penises (seriously, go look it up). When the internet noticed this, that helped give the ad more attention.
Score: 6 Votes (Like | Disagree)
Read All Comments