There's a new section on display adjustments and Retina scaling, introduced to allow the resolution of 4K displays to be adjusted much like the display of the Retina MacBook Pro, improving the size and readability of text and other on-screen elements. 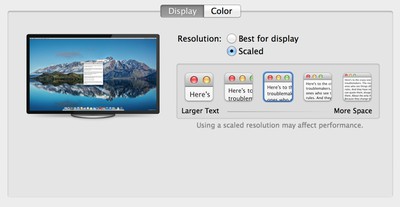 The revamped support page also notes that both the Mac Pro and the Retina MacBook Pro are now able to support 60 Hz 4K output for the five supported displays, using multi-stream transport, a feature previously limited to the Mac Pro. With the higher refresh rates, response times for tasks like game playing and video editing will be improved. Detailed instructions are given for enabling the option:

MacBook Pro (Retina, Late 2013) or Mac Pro (Late 2013) also support 60 Hz displays using multi-stream transport (MST). These displays need to be manually configured to use MST. Follow the steps below to use the display's built-in controls to enable this feature.

Your Mac will automatically detect an MST-enabled display. However, your display may require a firmware update to support 60Hz operation. Please contact your display vendor for details. If your specific DisplayPort display is not listed above, check with the display's manufacturer for compatibility information.

First released yesterday, OS X 10.9.3 with enhanced support for 4K displays can be downloaded via the software update tool in the Mac App Store.

No official Samsung U28D590D support? Arguably the most popular based on its price.


WTF does Apple need to "officially support" every stinking monitor being manufactured? That could get really ugly really fast trying to depend on Apple to release new drivers all the time when they cannot even keep their regular video drivers and 3D system up-to-date in a timely fashion. There should be a STANDARD that all 4k monitors support and Apple should then just support that standard, not this piece meal one-at-a-time approach.
Score: 8 Votes (Like | Disagree)

Lots of issues supporting more than 2 monitors (of ANY resolution)

If I remember correctly they did the same thing with the MBP. Retina came to 13" first then 15".

You remember incorrectly. The first Retina MBP was 15". A 13" rMBP came out 4 months later.
Score: 3 Votes (Like | Disagree)

newagemac
Ok now I'm confused. Previously, Macrumors reported that 60hz support in 10.9.3 would only apply to the 15" Retina Macbook Pro. Now its just saying "Retina Macbook Pro". So does this apply to the latest 13" model or is some information being left off?
Score: 2 Votes (Like | Disagree)
Read All Comments