Apple appears to be allowing developers to create promo codes for in-app purchases, a useful feature that makes it far easier to test and promote freemium games and apps with content that can only be purchased within an app once it has been downloaded.

Promo codes for apps have long been available, but were previously limited to initial app downloads and were not available for in-app purchases. This change will make it easier for developers to give early app testers, reviewers, and other users access to the full content available within freemium apps.

While it is unclear if the feature is currently available to all developers, Jeff Scott of 148apps.com shared a screenshot on Twitter of an in-app purchase promo code for Real Racing 3, from major developer EA. EA is using the promotion to give customers 10 free gold within the app, which has an in-app value of $1.99. The gold can be obtained by visiting this link on an iOS device. 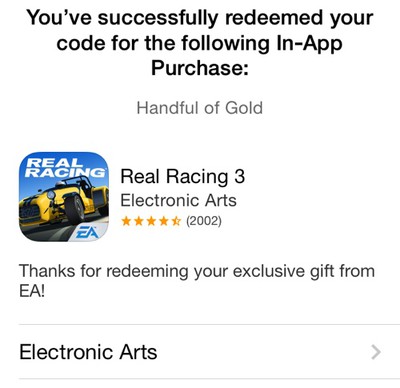 Entering the promo code provides users with gold in the app, and if the app is not installed, it will automatically download before redeeming the in-app purchase code.

Apple has not yet updated its developer site to reflect the availability of in-app promo codes and its rules still state "Promo codes don't work for In-App purchase products, including Newsstand issues."

goobot
This shouldn't have taken 5 years.
Score: 19 Votes (Like | Disagree)

ForzaJuve
Sometimes I just wish I could still purchase a full game and be done with it instead of being nickled and dimed for every little upgrade option. I am perfectly capable of slowly beating a game by winning and progressing through levels without having to pay.
Score: 13 Votes (Like | Disagree)

Southern Dad
All my devices have in app purchases blocked
Score: 4 Votes (Like | Disagree)

jthompson666
Apple really needs to add an easy way to run public app betas! Perhaps the developer could put their beta on the App Store and be issued with an ID code which members of the public can input in the same area as where you redeem an iTunes voucher - when you put the code in, a warning is displayed and then the beta is downloaded. The app could expire when the beta period is finished.
Score: 2 Votes (Like | Disagree)

street.cory
Maybe Clash of Clans will release some of these codes.. [SIZE="1"]heh[/SIZE].. [SIZE="1"]twitches[/SIZE]
Score: 2 Votes (Like | Disagree)
Read All Comments

Wednesday May 12, 2021 10:03 am PDT by Juli Clover
Apple's M1 iMacs are set to start delivering to customers next week, and ahead of the official launch day, benchmarks for the machines have been showing up on Geekbench, likely from reviewers who are testing them. It will come as no surprise that M1 iMac benchmarks are right on par with benchmarks for the M1 MacBook Pro, MacBook Air, and Mac mini, coming in with an average single-core score...
Read Full Article • 249 comments