A number of mostly international iOS users on MacRumors forums, Apple's support forums, and Twitter are reporting issues with failed app updates today. According to affected users, the process of updating apps in the iOS App Store produces a warning that "the update is not available for this Apple ID either because it was bought by a different user or the item was refunded or cancelled." 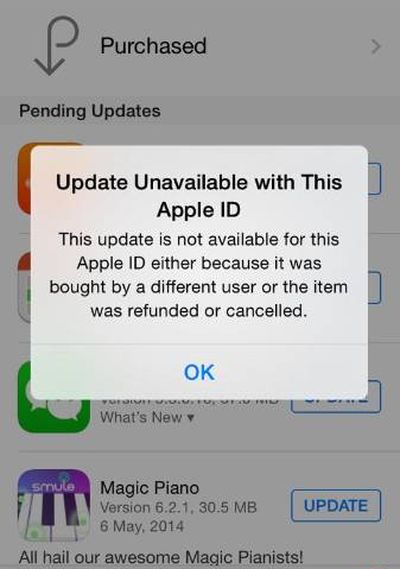 "I go 4 app updates today and as soon as I clicked the update button, the App Store app popped up with the following message:

"Update Unavailable with this Apple ID - This update is not available for this Apple ID either because it was bought by a different user or the item was refunded or cancelled."

I have always used a single Apple ID and this phone (5S) was bought new and have never had this problem in the past."

i didnt change or log out from my apple id at my iphone 5. But when i wanted to update one of my apps it said "update is not available for this apple id either becuase of using different id or...." then i checked my apple id's apps and most of my apps gone. what should i do to make them back to my apple id account? and i tried to delete those apps and redownload them but it gave the same message.

One user contacted an Apple Support representative, who confirmed there was a server issue on Apple's side that was affecting app updates. Apple is working on the problem, but the company has not provided a timeline for the fix.

At this time, this issue that you're experiencing with updating apps is being investigated. There are no possible fixes at this current time, as [it's] an issue with our servers, but we are working on it and should have it functioning properly later today.

While such an error message may appear when users are managing multiple accounts or changing countries, the number of complaints surfacing today and reports from several users indicating that they are only using one account with no changes in country suggest that there is indeed a broader issue with Apple's systems today.

stukdog
I just got this as well. (US account) The younger me would have been troubleshooting all morning.

The current me just says, "I'll try it later. Someone will fix it on the other end."
Score: 16 Votes (Like | Disagree)

I just got this as well. (US account) The younger me would have been troubleshooting all morning.

The current me just says, "I'll try it later. Someone will fix it on the other end."


You just encapsulated my life progress.
Score: 7 Votes (Like | Disagree)

I just got this as well. (US account) The younger me would have been troubleshooting all morning.

The current me just says, "I'll try it later. Someone will fix it on the other end."

dannyyankou
Before any idiot sarcastically says "it just works", this is just a bug that will probably be fixed in a couple hours.
Score: 2 Votes (Like | Disagree)

ghost of jobs
Well Im ok therefore I extrapolate that it's media lies and haters!...
Score: 1 Votes (Like | Disagree)
Read All Comments