On the day that a San Jose jury submitted a final verdict on the damages that Samsung owes Apple in the second United States patent infringement lawsuit between the two companies, Vanity Fair has published a lengthy piece that takes a look at Samsung's long (and successful) history of using patent infringement as a business tactic.

Back in 2010, before Apple filed an initial lawsuit against Samsung, executives from Cupertino (including lawyers) met with Samsung executives in Seoul, where it was made clear by Samsung VP Seungho Ahn if Apple chose to pursue a lawsuit, Samsung would countersue with its own patents. "We've been building cell phones forever," Ahn told Chip Lutton, an Apple lawyer at the time. "We have our own patents, and Apple is probably violating some of those." 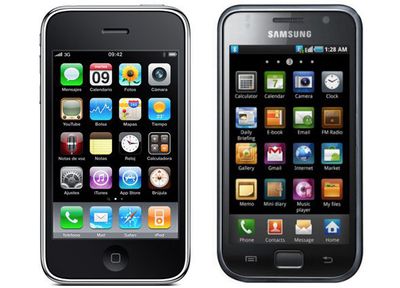 The iPhone compared to the Samsung Galaxy S
As it turns out, stealing key ideas from other companies and then using its own portfolio of patents to draw out lawsuits is a tactic that Samsung used long before Apple came into the picture.

According to various court records and people who have worked with Samsung, ignoring competitors' patents is not uncommon for the Korean company. And once it's caught it launches into the same sort of tactics used in the Apple case: countersue, delay, lose, delay, appeal, and then, when defeat is approaching, settle.

In 2007, Sharp filed a lawsuit against Samsung, alleging that the South Korean company had violated its patents. Samsung countersued, drawing out the lawsuit as it continued to produce TV sets using the stolen technology, building up its TV business. Samsung was found guilty of patent infringement years later in 2009, at which point it settled with Sharp to avoid an import ban.

There's a similar story with Pioneer, who filed a patent infringement lawsuit against Samsung over plasma television technology in 2006. Samsung countersued, dragging on litigation and appeals until a 2009 settlement. The long and expensive legal battle caused Pioneer to shut down its television business while Samsung thrived. Samsung has pulled the same stunt with Kodak, Apple, and several other technology companies.

Samsung hit Apple with the same tactic following the release of the iPhone. As has been documented during the ongoing global lawsuits between the two companies, Samsung evaluated the iPhone feature-by-feature and came up with 126 instances where Apple's iPhone was better than its own offerings, which led to the development of the Galaxy S.

Bit by bit, the new model for a Samsung smartphone began to look--and function--just like the iPhone. Icons on the home screen had similarly rounded corners, size, and false depth created by a reflective shine across the image. The icon for the phone function went from being a drawing of a keypad to a virtually identical reproduction of the iPhone's image of a handset. The bezel with the rounded corners, the glass spreading out across the entire face of the phone, the home button at the bottom--all of it almost the same.

Following the release of the Galaxy S and Samsung's refusal to sign licensing agreements with Apple due to its former history of successfully avoiding significant penalties for copying intellectual property, Apple filed its first lawsuit against Samsung. Samsung, of course, followed, leading to where we are today -- Samsung has thus far been ordered to pay Apple just over a billion dollars in the United States after two lawsuits, but appeals are far from over. Samsung has continued to develop its Galaxy line of devices and has cemented itself as Apple's biggest competitor.

Meanwhile, as has happened with other cases where Samsung violated a company's patents, it has continued to develop new and better phones throughout the litigation to the point where even some people who have worked with Apple say the Korean company is now a strong competitor on the technology and not just a copycat anymore.

The full story, which covers Samsung's history, its past patent lawsuits and other legal woes, Apple's creation of the original iPhone, and the dispute between the two companies, can be read over at Vanity Fair.

I get that you guys need to play to your audience, but to claim any level of journalistic integrity and publish a story with that title is just outright pathetic.

Of course Samsung copies. So does Apple, so does Microsoft, so does Activision, and Ford, and Toyota, and Lenovo, and Costco, and Boeing, and every single other company in the world.

matjamca
How the hell are Samsung being allowed to get away with this? Something needs to be done to stop their incessant infringement of other companies valuable, innovative patents.
Score: 56 Votes (Like | Disagree)

appleii.c
And these business tactics are why I choose never to buy anymore Samsung products again. As it is, it bothers me that there are Samsung chips in some of my non-Samsung products.
Score: 34 Votes (Like | Disagree)

ZacNicholson
Thou shalt not steal -- God
Score: 33 Votes (Like | Disagree)

love how we all forgetting that Apple was also found guilty in the same trial :rolleyes:


Apple wasn't found guilty of wilful infringement though. Samsung copied and knew full well they were doing so.
Score: 29 Votes (Like | Disagree)
Read All Comments