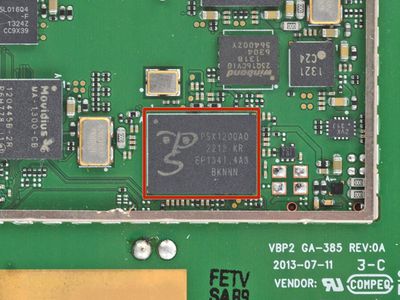 The unexpected PrimeSense chip was discovered in a teardown of the Project Tango smartphone by iFixit that was posted this morning.

This appears to be PrimeSense's new Capri PS1200 SoC 3D imaging chip, unexpected for a couple of reasons:

Just last year, Apple bought PrimeSense, manufacturer of the Kinect's 3D vision hardware. Speculators assumed we would be seeing this hot new hardware in an upcoming iOS device, with intent of mapping 3D spaces. Looks like Tango beat Apple to the punch with their own tech?

Google's Project Tango smartphone is one of the first mobile devices to use the diminutive Capri 3D sensor and it offers a glimpse at what Apple could possibly do with the technology in the future.

Project Tango is essentially a mapping tool, capturing the world around each user to provide directions, dimensions, and environmental maps. Google also has plans to use the technology to create immersive augmented reality games and apps that merge the digital world with the real world.

According to iFixit, Project Tango works very similarly to the original Microsoft Kinect, which also used technology developed by PrimeSense. Tango displays a bright grid of dots that are captured by IR sensors to build a depth map.

Along with the Capri 3D chip and the Myriad vision co-processors, Project Tango incorporates four separate cameras to capture its environment. Amazon is said to be working on a similar device that incorporates multiple cameras for 3D mapping and with Google and Amazon both working on 3D projects, it is reasonable to assume that Apple is also experimenting with the technology.

There have been no hints that Apple intends to incorporate PrimeSense technology in the upcoming iPhone 6, but motion control capabilities similar to the Kinect have been rumored for the next-generation Apple TV set-top box, so the first Apple device to use PrimeSense technology may very well be the Apple TV. Project Tango proves that PrimeSense's 3D chips are ready for mobile devices and it is likely that the company is continuing development on its Capri chips, improving the technology for possible inclusion in future iPads and iPhones.

How would they have "beat Apple to the punch with their own technology" if Project Tango is still just a project in their labs right now? So presumably same as Apple unless they know exactly how far Apple has gotten in their own labs.

You just pointed out what is wrong with a lot of Apple vs Google comparisons. Those two companies choose to reveal a very different amount of information about their upcoming products, yet people act as if announced prototypes were equivalent to real products.

Google is "innovating" with Project Ara, Project Tango, Android Wear, driverless cars and Google Glass, whereas Apple are well, "not innovating" according to many, as if their next big projects will appear out of thin air the day they are announced.
Score: 24 Votes (Like | Disagree)

OldSchoolMacGuy
Typical MacRumors headline. Not really Apple technology other than Apple bought the business. It's like saying my car isn't a BMW but rather a OldSchoolMacGuy because I bought it.
Score: 19 Votes (Like | Disagree)

Typical MacRumors headline. Not really Apple technology other than Apple bought the business. It's like saying my car isn't a BMW but rather a OldSchoolMacGuy because I bought it.

Your analogy would work only if Apple bought specific PrimeSense products. They bought the whole company.
Score: 13 Votes (Like | Disagree)

Typical MacRumors headline. Not really Apple technology other than Apple bought the business. It's like saying my car isn't a BMW but rather a OldSchoolMacGuy because I bought it.


Google bought Android, Youtube, and the overwhelming majority of what they call "their" technology. So I don't see a problem unless Macrumors does things differently for other companies.
Score: 13 Votes (Like | Disagree)

I know. It's pretty laughable if you think about it. I notice Google announces a lot of stuff without actually bringing something real to the market that people can actually buy. Sounds like just a bunch of Google PR fluff so they can make headlines in blogs to me. And it seems like a lot of people are starting to recognize it for what it is and point it out.

Or, instead of looking at it with some sort of conspiracy thoery or malice, maybe Google does it because they are techno junkies and love trying out new thoeries and ideas, even if they dont necessarily have a viable monetary reward for such and are attempting to try new technologies for advancement sake and not pure profit (since they make profit elsewhere).

Where, Apple runs their tech advancement as a pure profit house. only things that are profitable are developed, and technologies that might actually make life better can be often ignored and forgotten by them since it's not profitable enough for their time and effort.

but no. Of course for you it's easier to believe Google is just a failure of a company and only does it for PR.

BTW, while google has had it's share of projects that go nowhere... Apple has their share of failures in the past as well...
Score: 11 Votes (Like | Disagree)

I know. It's pretty laughable if you think about it. I notice Google announces a lot of stuff without actually bringing something real to the market that people can actually buy.

Cool. It's nice to see what companies are working on.

Even better, Google often lets ordinary people participate in their projects (like Glass).

I think that's terrific. Heck, wouldn't we all love it if we could try out Apple projects, even if they never see mass production?

its MacRumors forum. there's no honor or real journalism going here. The admins and news posters are in it for clicks. Not for their integrity.

Compared to sites like AI that post hate filled propaganda, MacRumors is the New York Times and Gandhi rolled into one.
Score: 10 Votes (Like | Disagree)
Read All Comments