In line with a report from last week, Microsoft today launched OneNote for the Mac, making several significant changes to the service for both mobile and desktop users. The biggest change is in pricing with OneNote now free across all supported platforms for personal use. The free Mac app also includes 7GB of free OneDrive storage space, which can be expanded by subscribing to Office 365.

The Mac version is very similar to the Windows version with only a few subtle visual differences. Both versions share the same notebook metaphor, ribbon interface and freeform note-taking features. 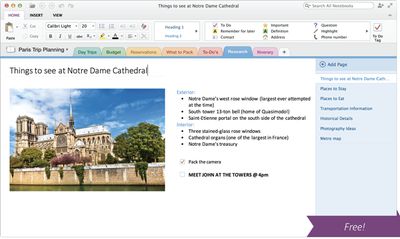 Along with a Mac version, Microsoft also is releasing a OneNote clipper browser plug-in for Internet Explorer, Chrome, Firefox and Mac Safari that allows users to save clippings from webpages. This feature is being extended to third-party apps via a new cloud API that provides developers with the ability to integrate OneNote clipping into their apps.

Other new tools in OneNote include Office Lens, which allows users to take a picture of a document and immediately import it into their OneNote QuickNotes with text recognition. Microsoft also enabled a OneNote email service that provides users with the ability to create new QuickNotes using a unique onenote.com email account.


Microsoft OneNote for the Mac [Direct Link] is available for free from the Mac App Store. While the consumer version is free, Microsoft is still offering a paid business version with premium features like Outlook integration and SharePoint support. New partner apps with support for OneNote include Feedly, IFTTT, News360 and Weave.

Do you have a reading comprehension problem? The ribbon interface was introduced back in 2007. The ribbon interface, in all of its forms, is an example of bad UI design. It took a dramatic turn for the worse in Office 2013 because the lack of depth and contrast because much worse in that iteration

What is your point of posting here other that blindly defending Microsoft and their poor UI decisions? I have to work with their stuff every day. Do you have a job in a microsoft "shop"? If not, then your opinion is irrelevant.

Yeah, no. The ribbon easily collapses to take the same space as the traditional menu interface when not in use, yet makes the vast majority of tools a 1-2 click affair as opposed to digging through nested menus. It's the best thing they've done to Office in years.

Everybody claims to like toolbars or tool palates, the Ribbon is just a collection of them.
Score: 12 Votes (Like | Disagree)

Nobody wants these applications on a Mac. We already have this functionality for free from Apple with the Notes application that syncs seamlessly across all our computers and devices. "Free for a limited time" ha, good luck if you plan on trying to charge for this at a later date. :D


The Notes app doesn't have a sliver of the same functionality as OneNote or Evernote.
Score: 7 Votes (Like | Disagree)

joshwenke
No thanks, I'll stick with Evernote.
Score: 7 Votes (Like | Disagree)

Unggoy Murderer
Running it on OS X now, and it's a very nice App. Hopefully this is the route that Microsoft will go down with the next Office for Mac, it's a very nice look and feel. Runs very smoothly too, miles better than the 2011 suite!

Description says "Now available for free for a limited time".

Razeus
Can't wait to get home.

Monday November 28, 2022 10:42 am PST by Juli Clover
Apple has cut back on its Twitter advertising, according to Twitter CEO Elon Musk. In a tweet, Musk said that Apple has "mostly stopped" its Twitter ads, asking if Apple hates "free speech." Musk went on to publish a poll asking if Apple should "publish all censorship actions" taken that impact customers and he began retweeting content from companies that Apple has had moderation discussions ...
Read Full Article • 1335 comments