Apple recently implemented changes to its loyalty program designed for organizations like schools and businesses, improving the discounts given to those customers, reports TechCrunch.

Customers are eligible to receive discounts through Apple Retail's Business Team after spending more than $5,000. Apple's particular program is three-tiered, offering increasingly greater discounts at $5,000, $35,000, and $200,000. Given the amounts spent, the program is typically limited to businesses and educational facilities that purchase Apple devices in bulk. 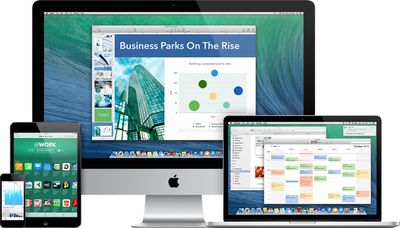 With the changes made to the program, Apple has upped the discounts buyers receive on Macs, iOS devices, and accessories.

With last week's changes, Apple has improved the discounts of several items across all of these tiers. Almost all of the discounts have been improved a couple percent. We're hearing, for instance, that Mac has gone from 5% to 6% in the lower tier and as much as 8% at the higher tier.

Third-party accessory discounts, for example, have risen from 5 percent to 10 percent for the lowest loyalty program tier, and even higher for other tiers, while iPads are discounted by two to four percent based on model and quantity.

Along with increased discounts on the above listed items, the program has been expanded for the first time to include both unlocked iPhones and Apple TVs. As noted by TechCrunch, Apple TVs have become increasingly important for schools and businesses that rely heavily on iOS and Mac devices as they work well with AirPlay as a way to avoid traditional projectors.

Apple's efforts to deploy iPads in both educational institutions and businesses have ramped up over the course of the last several years. The company often highlights its enterprise performance during quarterly earnings calls and a February survey suggested Apple accounted for 73 percent of all enterprise mobile device activations in the fourth quarter of 2013.

Two weeks ago, Apple launched new enterprise tools for large device deployments, offering several new features for mobile device management, including over-the-air tools to allow IT administrators to set up devices without the need for the Apple Configurator software.

Switchfoot
Considering I'm well above this as an individual consumer, is there any loyalty program for someone like myself?
Score: 8 Votes (Like | Disagree)

discounteggroll
you selfish peons should feel privileged to even be able buy apple products, let alone get some kind of discount

Can you get a business discount when buying a single Mac Pro that's >$5000?
Or do you really have to have bulk orders (like hundreds of Apple TVs).

dalupus
I see I am currently getting an 8% discount on the apple store with my company discount. Have no idea what it was before.
Score: 1 Votes (Like | Disagree)
Read All Comments