Apple is preparing to open a new retail store in Lansing, Michigan, according to the Lansing State Journal. The plans for a 6,000 square foot store at the Eastwood Towne Center were discovered in paperwork submitted to Lansing Township officials by a contractor working with Apple.

A contractor for the Cupertino, Calif.-based technology company filed an application with Lansing Township officials to start work on a nearly 6,000-square-foot retail store at 3025 Preyde Boulevard, which is part of the shopping center near U.S. 127 and Lake Lansing Road. 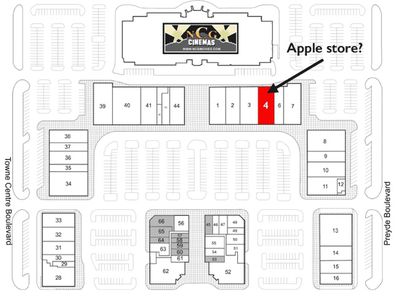 ifoAppleStore
Apple started hiring for this new Lansing store several months ago and still has 13 available positions ranging from Store Leader to Specialist (Via ifoAppleStore). This would be Apple's sixth location in Michigan and would provide retail coverage for customers in the central part of the state. Other Michigan stores are located in Ann Arbor, Clinton Township, Grand Rapids, Novi and Troy.

As part of its annual 10-K filing with the U.S. Securities and Exchange Commission, Apple revealed that the company plans to open 30 new retail stores in 2014, with approximately two-thirds of these new stores located outside the U.S. This international push already is in progress, with the company opening its first retail store in Brazil last week. Over 1,700 customers visited the Rio de Janeiro location on its opening day.

St. Germain
It's not often that I see Lansing mentioned on MacRumors.
Score: 8 Votes (Like | Disagree)

Edit: That's a terrible location. Near a congested highway that's 4-5 miles from campus. A campus whose student's primary method of transportation is not an automobile. I'm assuming the 45,000+ students in the area was enticing to Apple. Why not position the store on Grand River right next to campus? Stores open and close there every year, multiple times a year. Real estate wouldn't be hard to acquire.

Maybe Eastwood is more convenient to Lansing as a whole? Putting it on Grand River would be convenient only to MSU students, whereas anyone else would have to deal with East Lansing parking hassles (eg, find a spot in the Habitrail or some other parking deck and then walk a couple blocks). Furthermore, as you say, stores open and close there every year, and with the whole stretch west of Abbot now abandoned and boarded over, that area is starting to look seriously depressed… not the kind of environment where Apple usually sets up shop.

Also, wouldn't MSU students already have their own on-campus computer store? That's where I got my PowerBook 160 in 1993 while in grad skool at MSU.

Anyways, if they had to go with a mall location, interesting that they chose the outdoor (but centrally-located) Eastwood Town Center, rather than Meridian or Lansing Malls.
Score: 3 Votes (Like | Disagree)

WTH is this? damn it apple. Apple is all about opening new stores and less about products being made and fulfilling demands.


I'm a former Lansing resident living in the DC area. Gotta tell you we would have never made the shift to Macs and other Apple products without first trying them out in one of the local Apple stores. (We're spoiled here with four within a 12-mile radius, one of which was the very first Apple store to open.)

You can read all of the reviews in the world, but I like to actually get my hands on a new product and play with it a bit before shelling out big bucks.
Score: 2 Votes (Like | Disagree)

No, Michigan has Apple Stores only in the lower parts of Michigan. Start getting some in Birch Run or Saginaw.

chuxdaddy
Here at MSU, the campus does have on campus apple store, where at lot of MSU students shop. Many students including non MSU students will either buy their macs online or at best buy. I am happy to see an Apple Store here in Lansing. Driving to Novi is a chore and I miss being in Chicago where I had a choice of 5 stores to choose from. The eastwood towncenter is an up and coming residential and commercial area. I am happy to see Apple here. Thank you.
Score: 2 Votes (Like | Disagree)

xJus10x
East Lansing resident here. Would have saved me a four hour round trip when the Retina MacBooks were released. :D

Edit: That's a terrible location. Near a congested highway that's 4-5 miles from campus. A campus whose student's primary method of transportation is not an automobile. I'm assuming the 45,000+ students in the area was enticing to Apple. Why not position the store on Grand River right next to campus? Stores open and close there every year, multiple times a year. Real estate wouldn't be hard to acquire.
Score: 2 Votes (Like | Disagree)
Read All Comments