Following the release of Final Fantasy IV: The After Years last November, Square-Enix today launched Final Fantasy VI for iOS devices. The game's story centers around rebels Terra and Locke as they battle an evil force known as The Empire, with gameplay centering around the series' fast-paced "Active Time Battle" system. Recreated graphics and a touch-optimized battle interface are also present in the release as well, as the game also supports iCloud data syncing across devices. 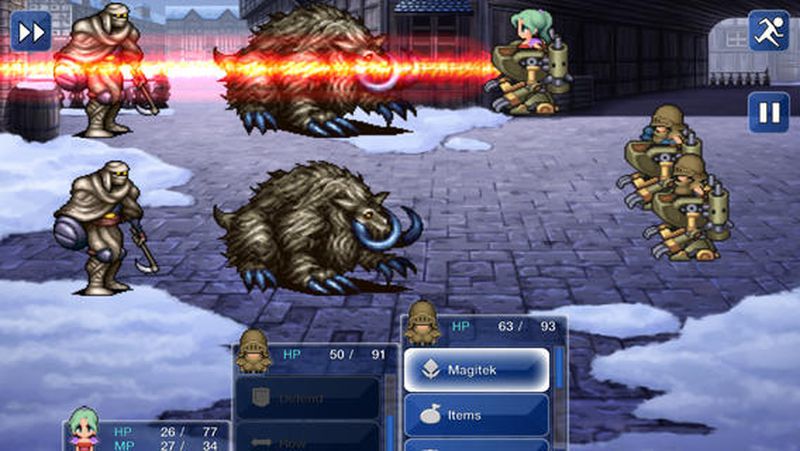 Features
• Game data saved with iCloud can now be shared across devices! At home or away, on your iPhone or iPad, pick the play style that's best for you.

• All graphics have been painstakingly recreated, bringing the world of FINAL FANTASY VI to your mobile device for the very first time! Kazuko Shibuya, one of the graphics designers involved in the FINAL FANTASY series from the very start, personally worked on the main characters and supervised the recreation of the game's graphics.

• Square Enix's vast experience in A-list smartphone RPG titles has been harnessed in implementing intuitive user-friendly controls that make the game easy to play on touch screens. The battle interface has received particular attention, with a complete overhaul for use on your smartphone.

• This smartphone release includes the new magicites and events that were introduced in the 2006 remake.

• Some events have been optimized to be played with user-friendly touch controls.

Final Fantasy VI is available on iOS devices for $15.99 and can be downloaded through the App Store. [Direct Link]

o0smoothies0o
The only problem I see with AAA games on the App Store is the fact that almost all of them will not be in the Top 200 apps, at least not after a week or two. I feel like developers know this and are probably fearful their apps aren't getting near enough attention to warrant development and release, but maybe I'm wrong, maybe there is no problem not being in a place where the majority look. In my opinion Tomb Raider is the best game on iOS right now, I had far more fun playing through and completing it, than any other game right now (and that's with difficult touch controls), and it is only $0.99 (I would have gladly paid $9.99 or more)!!! To me that game should still easily be in the Top few apps, but it quickly left the Top 200, maybe people don't want to play a half way difficult game anymore (or can't), I don't know. The new Tomb Raider reboot shouldn't even be called 'Tomb Raider' ('Lara Croft' or 'Drake's Fortune' would have made more sense), as you are hardly ever even in a tomb, and it is so painfully easy, and they even have a button to press which highlights whatever you need to do...sad how all games are made for morons now.

I think app discovery still needs to be worked on greatly, as it is, and always will be the cheap casual throw away games that fill the Top Apps (aside from maybe GTA due to overwhelming popularity). Don't get me wrong though, I'm extremely hopeful that these AAA games (albeit classics) are getting enough downloads despite this fact, and I'm praying Square Enix releases Tomb Raider II this year.
Rating: 6 Votes

luqtotheman
I am 100% fine with great games that are expensive, PLEASE NO IN APP PURCHASES.
Rating: 4 Votes

ProjectedLight
FFIV was overrated, I think a lot of people's nostalgia overwhelms their critical thinking. It was a breakthrough in its time, but it doesn't hold a match to FFVI. This game makes any short list for greatest games ever made. I hope the port is solid, I'm gonna buy it in the next few weeks.
Rating: 3 Votes

I am 100% fine with great games that are expensive, PLEASE NO IN APP PURCHASES.


This! I'm not a big fan of Final Fantasy, but I love the approach they're taking. I'd rather pay a lot to get the full game then having to pay throughout the game.
Rating: 3 Votes

EmpyreanUK
Finally and at last, Squenix have entered the progressive age: it's a universal app. My boycott can now end and, with surprise iCloud sync, really enjoy the benefits. Huzzah!
Rating: 3 Votes

SgtPepper12
Oh cool they messed up the graphics.
You know, they could have just resampled all the graphics by nearest neighbour, save a lot of money and the game would look great, just like the original game looked great.
But no, they do this crap, and they do it every time.
Rating: 2 Votes

Parasprite
I love seeing more and more real titles on the app store(s). I am very much okay with this. :D