Square-Enix has released a full 3D remake of Final Fantasy IV: The After Years for iOS devices, bringing its 2008 title to Apple's mobile platform for the first time. The game has players control various characters from the Final Fantasy IV universe in ten tales, with the game's original “Active Time Battle“ and “Band Abilities“ gameplay mechanics also intact. The remake of the game also includes Game Center support with achievements, as well as widescreen support on the iPhone 5, iPhone 5s, and iPhone 5c. 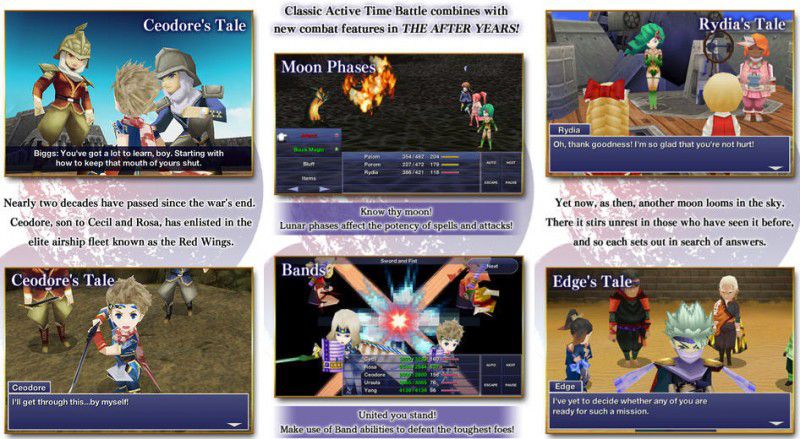 With a full 3-D remake, FINAL FANTASY IV: THE AFTER YEARS can now be played as never before. Take part in the epic sequel that unfolds nearly two decades after the events of FINAL FANTASY IV. Classic characters make their return alongside several new heroes, such as Ceodore, son of Cecil and Rosa.

Our sister site TouchArcade also wrote a review of the title, stating that while the game's graphics are visually appealing, the lackluster episodic nature and repetitive “grinding“ throughout gameplay constrain it from establishing itself as a high quality entry of the series on iOS.

Notably, an interview with longtime Square-Enix producer Takashi Tokita last month also mentioned that Final Fantasy VI would be coming to iOS devices this Fall, with Tokita himself teasing a potential release of the mega-popular Final Fantasy VII for mobile devices sometime in the future. However, the producer later clarified his comments about a potential Final Fantasy VII mobile release in an interview five days later, stating that the game's appearance on iOS devices is “years away“ because of the space limitations on the platform.

Final Fantasy IV: The After Years is available on iOS devices for $15.99 and can be downloaded through the App Store. [Direct Link]

An iOS app has a max of 2GB. As FF7 was 4 CD's, each 750MB, that would result in Square to remove 1/3 of the game. Even with modern compression techniques, I don't think that is feasible.


I don't think that you know what you're talking about.

For starters, the original game was 3 CD's, not 4. Also, the majority of the content on each disc was exactly the same, just with different events, videos and any areas and foes relevant to that leg of the game.
Rating: 4 Votes

Today, you can't buy an iOS device with less than 16GB.

Miharu
Remember that those 3 CDs weren't full of 650 Mb of unique content. Even Resident Evil 2 was on 2 CDs on Playstation but was successfully compressed to a 64 Mb N64 cart.
Rating: 2 Votes

acarney
Seriously?! Space limitations?! I can't help but wonder how much data was used with cut scene videos in what, MPEG1 or AVI format? Using h264 probably would cut down a couple hundred megs right there. I would gladly make room for a 1.4 to 2gig game and I figure any big fan would too!

I would be shocked if with the more advanced technology they couldn't get the game to fit into that kind of size... Probably while also increasing the resolution at the same time...

FF7 was released on 4 CDs man. ~750 MB each. Square pulled out all stops to release the original *despite* the space limitations of 1997 technology, and despite the inconvenience of switching out CDs between chapters, and despite the manufacturing hassles. All in the name of getting the game out to its fans. 1990s Square would've absolutely released FF7 on iOS.

Today, you can't buy an iOS device with less than 16GB. Hey if you can't make FF7 for iOS in the near future for budgetary, political, manpower issues, etc. at least tell it to us straight.

But hey FF4 and FF4 After Years are both excellent games, glad to see those on the App Store.
Rating: 2 Votes

Blasphemy! It's "Square Enix" without hyphen "-".
When I started my career at SQEX, that was the very first thing they wanted us to always get right.


It wasn't always "Square Enix," though. Used to just be "Square," until merging with Enix about a decade ago. I've got quite a few vintage (1980s-1990s) FF collectibles that all have the solo "Square" trademark. Those were the heady days of Japanese game development.
Rating: 1 Votes


If you want an old game that withstands the test of time, see FF6 or FFTactics.


I totally agree, FF6 is a must have... it's the Final Fantasy I'm waiting on iOS
Rating: 1 Votes

I recently replayed 7 on PC. It's not as good as you remember, but beyond that if they put effort into porting it, they would also want to redo pretty much all of the textures as the video compression on them was horrid. I doubt the original pre-compressed textures are still out there, otherwise we would have seen them on that last PC re-release.


It's true. The ground-breaking nature of FF7 wasn't the story or the gameplay, it was the ridiculously effective introduction of the RPG genre to the masses. It finally gave RPG's enough visual appeal for folks to start paying attention. And, as a result, we now have RPG elements in almost EVERY game we play.

If you want an old game that withstands the test of time, see FF6 or FFTactics.
Rating: 1 Votes

Hastings101
Take away the V add an X and I'd be much more excited :p
Rating: 1 Votes

Square could always split the game in two and sell them as Part 1 and Part 2. Normally I'd say cut the price for each in half, but you know they'd charge $15.99 each.

If you look at FF7 for the Vita it's only 1.37GB. It's not a remaster, but it would fit under the 2GB max for iOS. Minus a few tweaks I don't see why they couldn't change it for iOS. I'm not sure how the controls would carry over though...