Apple Releases iOS 7.0.5 for iPhone 5s/5c With Fix for Network Provisioning in China

Apple today released iOS 7.0.5 for the iPhone with a minor maintenance update to correct network provisioning in China for some iPhone 5s and 5c models sold in China, Europe, and Asia Pacific. Customers receiving iOS 7.0.5 outside of China will likely see no benefit from the update as it is designed to correct network provisioning within the country. 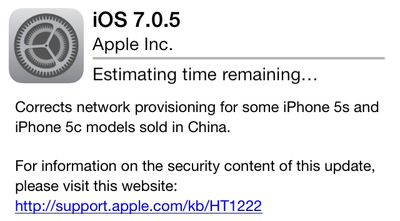 The update, which arrives as Build 11B601, is only available for some models of the iPhone 5s and 5c sold in China and some European/Asia Pacific iPhone models compatible with China's networks (those that are identified as iPhone 5,4 and 6,2):

The update comes more than two months after the release of iOS 7.0.4, which included additional bug fixes and a repair for an issue that caused FaceTime calls to fail for some users.

If that is the case, I wish MacRumors wouldn't even publish this...:mad:


Yeah cos the only nation in the world that matters is America... :rolleyes:
Score: 33 Votes (Like | Disagree)

JackieTreehorn
Half way there, on our way to 7.1 :D
Score: 8 Votes (Like | Disagree)

never understood the reasoning for it, we may not know?


If you are interested, why don't you learn about software versioning:
http://en.wikipedia.org/wiki/Software_versioning
Score: 7 Votes (Like | Disagree)
Read All Comments