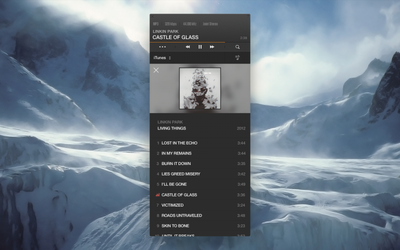 Originally launched last August, Vox is designed to be a replacement for playing music within iTunes, and supports a wide variety of audio formats including MP3, FLAC, AAC, Musepack, Ogg Vorbis, WAV, and more. Vox can import an existing iTunes library with metadata, and also offers offers a built-in equalizer as well as internet radio connectivity, which is available as an in-app purchase.

Vox 2.0 is available in the Mac App Store for free. [Direct Link]

Shame that you lose the Radio feature devs offered MR members when the app first launched back in August :(


For the radio, try this: http: //coppertino.com/vox/unlockradio.php?code=RUVOX

parish
Nice update, but a couple of minor gripes.

It's not displaying album art in the player but it is in the Dock icon :confused: The previous version did display it in the player (but just a small icon in the top left corner).

In the previous version the currently playing track was displayed in yellow/orange - title, artist, etc. - but in the version the only indication is that the track number is replaced by a small equaliser icon which makes finding the current track in large playlists a bit tricky - have to scroll through slower.

Great player though. I mainly use it for playing FLACs to save having to convert to ALAC for iTunes.
Score: 1 Votes (Like | Disagree)

Does anyone know what it means that Vox imports iTunes music? Does it double the space and create it's own library or does it share the library?


It just uses/scans your iTunes Library and plays the music from there. So no copies will be created.


But does anyone know if you can apply effects again? I heard that Vox had this feature but it was removed. Would be great to play my music with 432 Hz again.
Score: 1 Votes (Like | Disagree)

iReinventnv
This is just an add :eek:
Score: 1 Votes (Like | Disagree)

Dulcimer
Does anyone know what it means that Vox imports iTunes music? Does it double the space and create it's own library or does it share the library?
Score: 1 Votes (Like | Disagree)
Read All Comments

Friday December 3, 2021 7:10 am PST by Hartley Charlton
Apple's AirTags are being used in an increasing number of targeted car thefts in Canada, according to local police. Outlined in a news release from York Regional Police, investigators have identified a new method being used by thieves to track down and steal high-end vehicles that takes advantage of the AirTag's location tracking capabilities. While the method of stealing the cars is largely ...
Read Full Article • 226 comments

Sunday December 5, 2021 7:55 am PST by Hartley Charlton
Apple is working on five new Macs for launch in 2022, including a new version of the entry-level MacBook Pro, according to Bloomberg's Mark Gurman. In the latest edition of his "Power On" newsletter, Gurman said that he expects Apple to launch five new Macs in 2022, including: A high-end iMac with Apple silicon to sit above the 24-inch iMac in the lineup A significant MacBook Air...
Read Full Article • 157 comments