The Argument for an 11.88-Inch Retina MacBook Air 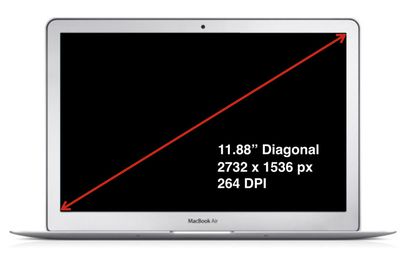 In October 2013, DisplaySearch analyst David Hsieh first revealed that Apple would be introducing a 12" Retina MacBook Air in 2014. The report was quickly corroborated by the reliable Ming-Chi Kuo.

It wasn't entirely clear at the time why Apple would choose to introduce a new 12" screen model, when their current lineup of MacBook Airs and Pros come in 11", 13", and 15" screen sizes.

Analyst Daniel Matte, however, lays out a convincing argument at his new blog on why Apple would choose that size. Matte believes that the new Retina MacBook Air will be exactly 11.88" in diagonal screen size, as that would allow Apple to offer a Retina Display (2732 x 1536, twice 1366x768) with the exact same PPI as the iPad Air (264 PPI). The full analysis is worth reading.

It would make sense for Apple to take advantage of the same display technology it has been utilizing for the 9.7” iPads by cutting their panels to this larger size.

Apple is quite deliberate in choosing screen sizes for their new products.

The earliest supply chain rumors of the iPad mini included the specific screen size of 7.9 inches. The reason for that particular size later became apparent as it similarly allowed Apple to use the exact same PPI displays that were used in original iPhone and iPod touch.

The main discrepancy in Matte's argument is that the original DisplaySearch report predicted a lower resolution (2304 x 1440). Also, in the past, we'd heard very specific display sizes from Apple's supply chain, such as the 7.9" iPad mini display rather than 8" iPad mini display. In this case, the early reports (so far) have been at 12-inches.

Still, the new Retina MacBook Air is not expected until mid-2014, so we should start hearing more as production starts ramping up.

I don't get the logic here. Why would it matter for a laptop what the exact PPI are? Isn't the whole point of a retina display that you can't distinguish pixels and they scale screen elements to whatever you want?

Also, I don't think apple would make a small technical detail the main point in what screen size they offer. They would clearly base this decision on customer demand and user experience. Only then they would choose the technology they need to produce the laptops.

Because they are already producing massive quantities of sheets of this DPI screen. They get the benefits of scale by using the same production lines. That means a more affordable Retina MacBook Air.

This is just silly.


Hardly. I would say its almost a definite.

Unless they intend to replace it with an 11" iPad, this is just silly.

Ditch them both, and introduce one 12" Retina model...price it at $999, and be done. How does that not work for everyone looking for a MBA?
Score: 29 Votes (Like | Disagree)

But then what would happen with the 11- and 13-inch models currently available? Apple's been slowly phasing out the non-retina MBP models (only 1 left now, I believe), but they had the same screen-sizes.


Seems like a One-size fits all to me....IF they can make the price reasonable.

Infinitewisdom
So maybe those rumors of a bigger iPad are actually for this instead?
Score: 12 Votes (Like | Disagree)

Nielsenius
Speculation? More like some guy talking out of his ass.

The current 13-inch and 15-inch rMBPs don't have displays with identical PPI. I cite this as an example of Apple making screen size a greater priority than PPI standardization.
Score: 8 Votes (Like | Disagree)
Read All Comments