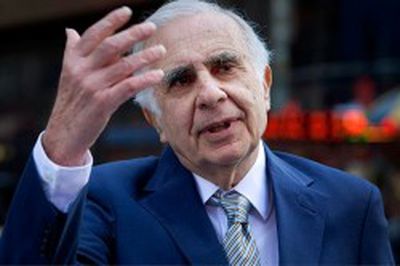 Activist investor Carl Icahn has just tweeted that his investment firm has acquired an additional $500 million in Apple stock over the past two weeks, pushing his stake to over $3 billion. Calling continued investment in Apple a "no brainer" at current prices, Icahn also continues to believe that Apple needs to significantly increase its stock buyback program. A more in-depth letter from Icahn on the topic will be forthcoming.

Icahn began buying significant amounts of Apple stock last August, and has been vocal about encouraging Apple to increase its buyback program to help investors. Icahn met with Apple CEO Tim Cook at the end of September, where he pushed for a $150 billion buyback. As Icahn has taken his case to investors, he has scaled back his proposal and is asking shareholders to vote on a $50 billion proposal at next month's shareholders meeting. That proposal would, however, only be advisory, and should it be approved Apple would continue to be free to do as it pleases.

For its part, Apple management has stated that it is continually evaluating its buyback program and that it plans to announce any changes to the program during the first half of this year.

Icahn: Apple is a culture with a great ecosystem; what bothers me a hell of a lot is that billions of dollars is just sitting there. • $AAPL — CNBC Newsroom (@CNBCnow) January 22, 2014

I don't know much about the market either, but I would imagine that if Apple buys back stock then there are less shares available to the public. I would think that would push the price per share up.

Maybe someone will chime in.

Don't worry, about 98% of the comments in these threads come from people who don't know a thing about the markets.

When you buy shares in a public company, you are buying a piece of that company's earnings. Buybacks concentrate earnings on fewer shares. If a company with 100M shares earned $100M, the earnings per share (EPS) is $1.00. If they take 50M shares off the market through a buyback, EPS will rise to $2.00. If companies do nothing about the number of shares outstanding, over time the opposite will happen, as they grant shares and stock options to executives. This is called dilution. In part, buybacks are a strategy to reverse dilution.

So just to be clear about a couple of things: First, Apple is under no "pressure" do anything, so the headline of this article is fundamentally misleading. Second, the buyback that Icahn is proposing represents less than the amount of free cash Apple will generate in one year. So even if Apple accepted the proposal, they'd still end up the year with more than the $150B cash hoard that they are sitting on today.

Finally, Icahn is fundamentally correct. When a company generates cash far in excess of their ability to reinvest it in growing the company, then they need to find other ways to benefit stockholders. The two ways are dividends and buybacks. Apple is already doing both, so the only question is whether either or both will be increased. Last I heard from Apple, they were preparing to announcing something this month. It might come next week, at the earnings announcement.
Score: 20 Votes (Like | Disagree)

NT1440
Investors like this guy are the reason why company's fail. Take a look at his dealings throughout his history, it's disgusting but he always walks away with millions while the workers get ****ed.

Look up the practice known as Greenmail, this guy was a pioneer of the practice and ruined thousands of lives in the process of doing absolutely nothing of value.
Score: 17 Votes (Like | Disagree)

SvP
scum of the earth
Score: 17 Votes (Like | Disagree)

I actually can't tell if this guy is just a good businessman, or a 'hidden in plain view' criminal...?

dollystereo
This guy is just a parasite of the system...making money of thin air
Score: 11 Votes (Like | Disagree)

Unggoy Murderer
I actually can't tell if this guy is just a good businessman, or a 'hidden in plain view' criminal...?
Score: 10 Votes (Like | Disagree)
Read All Comments