Umoove Experience: The 3D Face & Eye Tracking Flying Game is a simple app that allows users to fly through a village using gentle head movements that are detected by the camera. The goal is to collect potion bottles scattered throughout the landscape by turning and moving up and down with head movements. The game also incorporates touch gestures at the same time for an all-encompassing gaming experience, with the touches used to control flight speed. 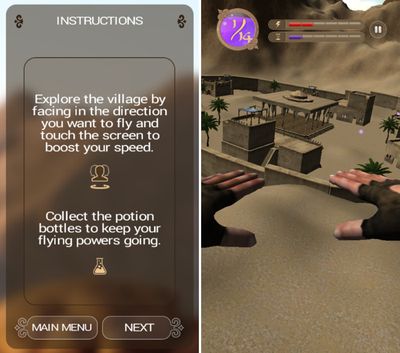 Enjoy the 3D flying experience and test your skills by collecting the purple magic potions, which will give you more energy to continue exploring the village.

The Umoove Experience is only the beginning! Think about the potential of this technology on other app and gaming experiences such as first person shooters, driving games, and other flying or running gaming experiences.

Umoove has been developing its head and eye-tracking technology since 2010, and the current game serves as a simple demo highlighting the ways the system could be used in other apps and games in the future. As in the game demo that combines head movements with touch, Umoove's goal is to supplement traditional touchscreen controls rather than replace them.

In an interview with TechCrunch, Umoove CEO Yitzi Kempinski notes that the addition of head-tracking to standard touch controls is meant to mimic real-world experiences.

"We're talking about adding another layer on top of touching, similar to what the mouse did with the keyboard — they didn’t throw out the keyboard, it actually added suddenly the ability to have another layer of interaction, so it's the same sort of thing here," says CEO Yitzi Kempinski.

"It's supposed to be something that mimics real-world experience. I'll give you an example… if you think of a first-person shooter, those games you play and you have to shoot, and then you have the joystick to move around and you have to drag the screen to move around the room. Basically what we do is simple: based on where you face that's where you're aiming."

Umoove is currently offering indie developers a free SDK to incorporate face-tracking into their own apps and games. According to Kempinski, Umoove is also talking with OEMs about adding the technology into future devices.

Motion tracking using the iPhone's camera has been explored in the past, with two French researchers detailing a system for head tracking using an iOS device's camera back in 2011. Apple has expressed interest in similar technology in the past, with a 2009 patent detailing face-controlled 3D displays, and it has implemented accessibility options in iOS 7 allowing iPhone users to control their devices using head movements.

Umoove Experience: The 3D Face & Eye Tracking Flying Game can be downloaded from the App Store for free. [Direct Link]

Oh wait, this isn't Samsung? Then, it's the most revolutionary thing ever existed!!


It's a game - by definition, relatively gimmicky.

But of course, gotta make sure to get in a defense of Samsung and shot at Apple and its fans huh? :rolleyes:

Seems like it could be cool for games. Surprised that its so software dependent. I guess I just assumed there was some hardware involved in the tracking stuff.....

Oh wait, this isn't Samsung? Then, it's the most revolutionary thing ever existed!!
Score: 13 Votes (Like | Disagree)

It's a game - by definition, relatively gimmicky.

But of course, gotta make sure to get in a defense of Samsung and shot at Apple and its fans huh? :rolleyes:

And Apple's not involved.

I'm trying to imagine why anyone would expect people to have great loyalty to some company called Umoove that nobody ever heard of--and then be offended in advance by that loyalty?

Really? Anti-Umoove trolling? All over a cool little tech demo with some future potential?

irfaanfaki
Seems to work fairly well I've tested it on an iPad. Wonder if it's worth $3.2 billion ?
Score: 9 Votes (Like | Disagree)

Oh wait, this isn't Samsung? Then, it's the most revolutionary thing ever existed!!


Troll alert. Who said it wasn't a useless gimmick? Plus this is some random small company, not Apple. Fail.
Score: 6 Votes (Like | Disagree)

One is a game and one is pausing a video.

Not just that, but it's also not like this "game" (more like tech demo) is preinstalled on new iPhones and marketed by Apple as a major selling point of their new phone.

It seems like a bunch of MacRumors readers have switched to a Samsung phone and will upvote any positive comment about Samsung, no matter how dumb, to validate their purchase.

Maybe it's just me, but I feel like the community here is going downhill. We should of course not blindly defend Apple either, but at least try to stay on-topic and rational, and not upvote those who aren't. But you'll often see a totally illogical, off-topic comment about Samsung in top comments instead...
Score: 6 Votes (Like | Disagree)
Read All Comments