NSA Was Able to Capture Live Data From Compromised iPhones in 2008, Including Live Camera, GPS, and More

The U.S. National Security Agency could retrieve a vast array of data from compromised iPhones according to an NSA document from 2008 leaked by German magazine Der Spiegel and security researcher Jacob Appelbaum. (via Forbes)

According to the report, the NSA could install special software onto iPhones as part of a program called DROPOUTJEEP, that provides significant access to user data and other relevant information.

DROPOUTJEEP is a software implant for the Apple iPhone that utilizes modular mission applications to provide specific SIGINT functionality. This functionality includes the ability to remotely push/pull files from the device. SMS retrieval, contact list retrieval, voicemail, geolocation, hot mic, camera capture, cell tower location, etc. Command, control and data exfiltration can occur over SMS messaging or a GPRS data connection. All communications with the implant will be covert and encrypted 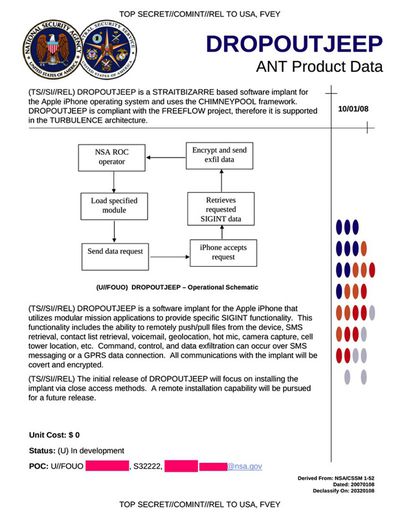 The NSA in 2008 claimed a 100 percent success rate in installing the software on phones it had physical access to, and it's possible that the spy agency has improved its software so it can be installed remotely or via some sort of social engineering, something that was specifically mentioned in the documents. It's also possible that Apple has closed the security holes the NSA was using, making it more difficult to compromise iOS devices in this manner.

A separate report says that American spy agencies have intercepted shipping packages -- something the NSA calls method interdiction -- containing new electronic devices destined for specific targets, installed special spy software on those devices, and then sent them on their way. One report calls the shipping disruptions some of the "most productive operations" conducted by the NSA.

Appelbaum said in a talk at the Chaos Communication Congress this weekend that he believes Apple assisted the NSA in its spying efforts though he cannot prove it and he hopes Apple will clarify what assistance they do or do not give the NSA. In addition, the NSA has targeted and cracked a number of different smartphones including those running the Android and BlackBerry operating systems.

The relevant portion of his talk begins at 44:30 in the below video.

AngerDanger
If those bastards do anything to tamper with my 2008 Doodle Jump high scores, I'm going to lose it!
Score: 28 Votes (Like | Disagree)

1) ...
I'm not sure why one would be worried about that in the professional world unless they were into wrongdoing.
...


really? It's called the Fourth Amendment to the U.S. Constitution. and everyone should be worried that the American police state run amok violates it with impunity.
Score: 19 Votes (Like | Disagree)

In other words, they couldn't do in (in 2008) through sheer software; unless they somehow managed to use jailbreaking for their benefit.


However, what really bothers me very much is the interception of packages. That really is irksome. More reason to perform a full Restore [when I get them first time] on all my devices like I have always done.
Score: 15 Votes (Like | Disagree)


that whole 4th amendment obsession is so weird to me like isnt it dated by now. stuff that made a bit of sense back then shouldnt be the holy grail that can never be wrong now in 2013/14


Dated? After less than 250 years? The Roman Empire lasted over 2000 years. Will the American Empire last that long?

What exactly is it about "The right of the people to be secure in their persons, houses, papers, and effects, against unreasonable searches and seizures..." that you think is "dated"?

It was actually incredibly well-written to apply just as precisely today as it did then.
Score: 13 Votes (Like | Disagree)

macduke
This is only going to hurt the U.S. economy in the long run. The internet economy is nothing without trust. The rest of the world will innovate and seal us off like a plague. We aren't always going to be top dog when it comes to technology. I'd bail on using U.S. Internet companies too except that I'm in the U.S., so I'm screwed either way. Without privacy we might as well be animals in a zoo. The government will feed us, give us health care, watch our every move. We only need to hand over our soul and basic right to freedom.

The majority of people won't complain until their TV goes out, and even then they'll be too obese to do anything about it. The control is slowly tightening. The government can get away with anything when they control access to basic necessities. It is in man's nature to be corrupt and seek power. Why are we slowly tearing down the limitations our forefathers put on the greed of man? We might as well quarter soldiers in every household to watch those who say they aren't doing anything wrong and declare a supreme king to rule us from on high. History repeats itself if we don't pay attention to it. Great empires are always falling. The U.S. is not immune. What makes us special in the history of the world is our freedom and if we let that erode away into nothing then we fail and the great American experiment will come to a tragic end.
Score: 12 Votes (Like | Disagree)
Read All Comments