Ahead of Christmas, the evad3rs released the evasi0n jailbreak for iOS 7, allowing Apple users with newer devices like the iPhone 5s, 5c, and Retina iPad mini to jailbreak their devices for the first time to access tweaks and apps outside of the App Store.

Shortly after the jailbreak was released to the public, controversy surfaced with Cydia administrator Jay Freeman noting that evasi0n did not include an official version of Cydia, an iOS application that allows users to install software on jailbroken devices. Freeman also revealed that the jailbreak inexplicably included a third party app store called “Taig” for Chinese users. 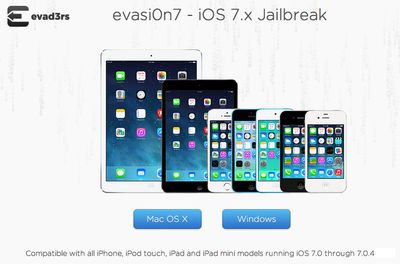 The Taig app store was quickly found to include pirated apps, prompting the evad3rs to explain their position via an open letter claiming no knowledge of the piracy and pledging to further investigate the issue.

Now the evad3rs have published a second open letter to the jailbreak community, announcing the removal of the Taig app store from the evasi0n jailbreak.

However, after investigation and after notification from the community, we found examples, including pirated tweaks, Apple App Store apps, and even pod2g's PodDJ app. We dropped the ball on this. While we at first did not believe Taig purposefully violated our agreement, the depth of the transgression against the software developers and the jailbreak community cannot be overlooked and we could not move forward after that even if it were fixed.

We terminated our relationship with them. We are very disappointed that they have decided to put up a cracked version of the jailbreak on their site that installs Taig. We did not give them any permission or source code.

Following the controversy, there were rumors that the evad3rs had accepted money from Taig for the deal, which the evad3rs now deny. "We have received no money from any group, including Taig," reads the letter. "Our donations are being given to Public Knowledge, Electronic Frontier Foundation and Foundation for a Free Information Infrastructure to help protect jailbreaking as your legal right."

The evad3rs team also clarifies that no user data was obtained by Taig, and that exposure was limited to users who had their computer's language set to Chinese.

The evasi0n jailbreak, which no longer includes Taig, can be downloaded directly from the evasi0n website. Evasi0n does not include an official version of Cydia, and according to the evad3rs, they are "working hard to fix the problems with the jailbreak."

MrGuder
I would never jailbreak my phone....but if I were....I would think that "Trust" would be one of the most important qualities in performing this...seems to me that was broken...
Score: 17 Votes (Like | Disagree)

CodeBreaker
Sheesh. I really feel sorry for these guys. The worked very hard on this for months. And this time, all they got from it was hate and bullying by the entire community.

Yes, they screwed up by not doing a background check on the company before including its app store. But hey, there is absolutely no proof of any private data getting leaked anywhere (if there is, I would like a source). Taig only sent data when the Chinese language was detected on the computer from which evasi0n was used. And this data only included the UUID and a bunch of prefs/settings (which is exactly what Cydia does). This did not upload your photos/contacts/emails/messages etc. anywhere.

If you are uncomfortable with this, please stay off the internet. Because your Googles and Facebooks collect and possibly leak (NSA, spying, blah) much more data about you.

Stop all this hate.
There is nothing wrong with the evasi0n iOS 7 jailbreak. Saurik himself recommends it. The job of the jailbreak is to give root access to the OS. And it did that pretty well. For free. All your favourite tweaks will work when Saurik updates Mobile Substrate (remember its Christmas and be patient).

And if you don't intend to jailbreak, please stop spreading rumours. It hurts the entire community.
Score: 16 Votes (Like | Disagree)

Why would anybody want that?

Technarchy
I jailbroke my phone last time around, but I am passing on this and probably won't jailbreak again.

The bugginess, instability and security risks just aren't worth it to me.

mKTank
It's been displayed on reddit that without Taig even being installed, the jailbreak still regularly made contact with the Chinese site. No thanks, I'll keep my iPad unmolested. Not to mention these guys probably ruined any chance of having jailbreak for final 7.1. They used up valuable exploits on a beta. AND they didn't include saurik in its development, so now a lot of vital tools are broken or unsupported. But hay at least we did it first yay. Slow claps.
Score: 12 Votes (Like | Disagree)

But you have a contract with Taig that says they won't do pirating on their site. How is it possible that they are in fact doing whatever they want? Oh yeah, you have absolutely no means of effectively enforcing that contract on a Chinese located company. Sorry.

And they stole your code? I'm shocked, schocked I say.

Seriously, if you left any of your devices unattended during any face to face meetings, I'd just get them wiped right now.
Score: 9 Votes (Like | Disagree)
Read All Comments