The popular Evasi0n jailbreak has been today updated for iOS 7.x., marking the first time users have been able to deploy an untethered jailbreak on any device running iOS 7.0 to iOS 7.0.4, including newer devices such as the iPhone 5c, iPhone 5c, iPad mini with Retina Display, and iPad Air. The method allows for users to jailbreak their devices to make use of unauthorized content like themes, tweaks, and apps from sources other than the App Store. 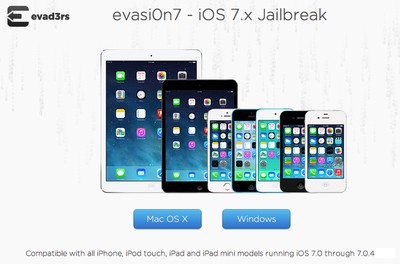 However, Cydia administrator Jay Freeman noted on his Twitter that he was not informed about a new version of Evasi0n before its release, also indicating that the build of Cydia installed with the new jailbreak is not official and may lead to some compatibility issues with existing downloads on the service. However, users on our forums are actively pointing out which Cydia apps are compatible with the new jailbreak, and it is recommended you look there for specific information.

Evasi0n is available now for OS X and Windows as an untethered jailbreak, with users only having to apply the method once. Tethered jailbreaks requires users to have their devices connected to a computer each time they restart.

Update: Cydia administrator Jay Freeman has also revealed on his Twitter that Evasi0n installs a third party "app store" named Taig for cracked apps in China. Furthermore, two tweets by developer i0n1c (via Y Combinator) state that a Chinese company paid the Evad3rs development team a rumored $1 million dollars to release the jailbreak in order to force the Taig app store onto devices.

tbrand7
You mean the Jailbreak with $1,000,000 in sponsorship dollars from a Chinese company that injects malware into your iPhone with an App Store for cracked apps called TaiG that does an "E.T. Phone Home" of your private data to a Chinese server? Sounds awesome!
Score: 23 Votes (Like | Disagree)

Klae17
Finally I can get the features Apple is going to steal in iOS 8.
Score: 15 Votes (Like | Disagree)

mikethebigo
Be careful with this one, it seems some other interests were involved with the code...

nezr
stay the f- away from this
Score: 10 Votes (Like | Disagree)

ViRGE
It bears mentioning that if you're on a Chinese iPhone, you should be very careful before installing this. If the Evasi0n installer detects that it's running on a Chinese device, it will install a 3rd party app store (as root no less), Taiji.

There is some significant concern right now that Taiji is collecting additional user details and sending that information back to the owners (not Evasi0n), which may present a privacy/security risk. Plus Taiji is chock-full of pirated apps, so it's not really on the up-and-up in the first place.

Johnny Steps
Well this came out of nowhere! :0
Score: 7 Votes (Like | Disagree)
Read All Comments