Just hours after Apple began taking orders for the new Mac Pro with shipping estimates of "by December 30" for stock configurations, availability has already slipped significantly with new orders currently being quoted shipping in February. 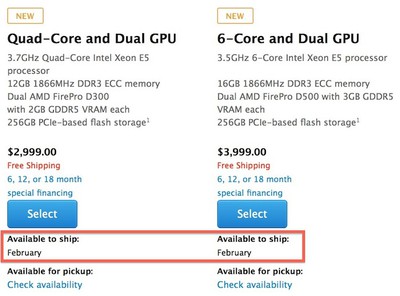 The rapid move to push shipping off by over a month indicates that Apple has indeed been struggling to have any Mac Pro units at all ready to ship in order to meet its previously announced launch timeframe. Reports had indicated that Intel's chips are in short supply and may have been one of the major bottlenecks for Mac Pro production, but with an all-new design, high-end technology throughout, and Apple shifting assembly to the United States, there are any number of areas where Apple may be experiencing production constraints.

"Demand for the all new Mac Pro is great and it will take time before supply catches up with demand," an Apple spokesman said today.

Some customers with build-to-order configurations are even seeing shipping estimates of March.

It really is an awesome bit of kit, would love to justify having one. One day...
Score: 7 Votes (Like | Disagree)

vmachiel
This just shows how little manufacturing there is in their USA plant right? It's such a low volume product, and they're already 2 months out.
Score: 7 Votes (Like | Disagree)

Hastings101
I blame Texas, such a slow state.
Score: 6 Votes (Like | Disagree)
Read All Comments

Sunday May 31, 2020 8:04 pm PDT by MacRumors Staff
Amid unrest in numerous U.S. cities following last week's killing of George Floyd by police in Minneapolis, Apple CEO Tim Cook has shared an internal memo with employees (via Bloomberg) addressing the pain that many are feeling and urging others to commit "to creating a better, more just world for everyone." Cook also announced that Apple is making donations to several groups challenging...
Read Full Article • 115 comments

Tuesday June 2, 2020 1:31 am PDT by Tim Hardwick
Apple Music has cancelled its Beats 1 radio schedule for Blackout Tuesday and is suggesting that listeners tune in to a radio stream celebrating the best in black music. Blackout Tuesday is a campaign organized by the music industry to support Black Lives Matter after Minneapolis citizen George Floyd was killed by police in the course of his arrest. On launching Apple Music, many users...
Read Full Article • 423 comments