Nearly 20 months after the launch of FileMaker Pro 12 by Apple subsidiary FileMaker, Apple appears to have prematurely revealed the upcoming debut of the next-generation database software, FileMaker Pro 13, with new entries in its online stores in several countries. Several versions of FileMaker Pro 12 are also shown as discontinued in those stores, while the new versions are listed as shipping "within 24 hours" despite no official announcement of their launch having been made yet. 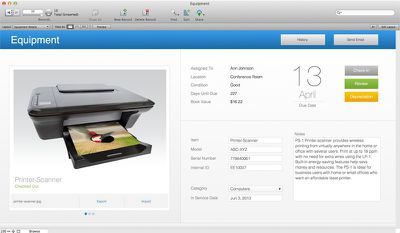 Screenshots accompanying the new listings show a new "Share" button in the toolbar, as well as an iOS 7-styled makeover for the FileMaker Go apps for iPhone and iPad. The listings otherwise appear to primarily be placeholders for the time being, using the same box art as their predecessors with the exception of replacing "12" with "13". Product descriptions are also fairly generic, lacking any discussion of new features or other details on the upcoming software.

New versions of FileMaker Server are not currently listed in Apple's stores.

In addition to FileMaker Pro, FileMaker had previously offered a series of consumer-focused Mac and iOS database apps under the Bento name, but that line was discontinued several months ago.

Update: Apple has removed the FileMaker Pro 13 listings from its online stores.

Skika
What does FileMaker even do?
Score: 10 Votes (Like | Disagree)

Given Apple's history of dumping products I would not want to use Filemaker. The sorts of things one does with a database system one wants to be able to keep doing for the next 20 or 30 years, including having full access to all old data. Apple has a terrible reputation for very poor legacy support. Businesses need legacy support so they can continue to access their data and applications. Unlike consumers we don't want to reinvent the wheel every three to five years.

I'm pretty blown away by some of the ignorant comments in this thread. It's pretty obvious that the naysayers haven't really used the product or are home users balking at the price.

First, FileMaker is a separate company. Apple owns it, but that's all. It's run independently. It's also profitable and has been for years. FileMaker is the #1 selling database for Mac and PC. It's been developed and supported for 20+ years. The suggestion that Apple is going to simply abandon it on a whim is asinine (especially as they're prepping to release version 13).

As for the product itself, there's no other tool on the market that does what FileMaker does. You don't need a computer science degree to rapidly develop a custom, multi-user, cross-platform GUI application, much less maintain and support it. It's far more than a dumb form generator as others have very wrongly suggested.

FileMaker is expensive because it's a specialized tool. It's not a mass market product anymore than AutoCAD is (and I don't see anyone tearing AutoDesk a new one for their pricing). So many ignorant and just plain stupid comments in this thread. Wow.

A few weeks ago I posted a thread asking for advice on the best OS X business management software/database. I have a friend who is branching out her business, using Square as her backend as she she has been a Square client for a while. I just got her a Square Stand for her iPad w/ a cash drawer and USB scanner. I recommended FileMaker Pro 12 Advanced - seems robust, can be tailored and has iOS apps. Either that or use Square's dashboard and Square Market which tracks sales, inventory, site hosting, etc. but worried it may be limiting and will lock her into Square's system. My other recommendation is a 2-bay Synology server for "Time Machine", web site hosting, business database, surveillance station, etc.

I recommended FileMaker Pro as I've used it for many small - med business clients in the past. Yet some have stated Apple may drop support (is this owned by Apple?), and other such comments.

Given she needs a system to track clients, inventory, business records, etc and allow access for other business partners and employees (esp. via iOS apps), is this the best system? I intended to make a custom business template tailored to her needs, now I'm a bit concerned.

Don't let ignorant comments scare you from using a great tool. Why would Apple abandon a financially successful product? Why would they be planning to release version 13? Why would they have been developing and supporting it for 20+ years? The FileMaker haters in this thread are, frankly, full of you-know-what. There's no other tool like FileMaker out there with that kind of bang for your buck.

Amen. Years ago, the Apple-owned subsidiary Claris/Filemaker was doing everything right, they even made timely updates to products like AppleWorks and Filemaker Pro.

In the last couple of years, Filemaker seems to have been sitting on their butts, doing nothing to go forward, and what few products they do have they have butchered to the point of alienating customers (e.g. Bento).

If Filemaker is not able to get its act together soon, it may be time for Apple to close down the moribund Filemaker Inc. and just annex it right back into Apple.

Why would they do that? FileMaker is profitable. Get their act together? Sitting on their butts? Do you even use FileMaker? They've been doing a lot of great work. Version 7 was a sea change. Their interface tools have vastly improved over the past few versions. Script Triggers were a profound change and have made the product into a legit tool for creating custom applications. Nevermind the fact that they've rolled out an iOS version in the past few years too. And how can you complain about "timely updates" when they've been releasing new versions every 12-18 months? What do you want from them? Unbelievable.

I can't even export my project to other databases, FM-pro uses some special formats that cant be exported easily. FM-pro in its basics sucks but its the only database runtime maker i could handle as a non professional.

Totally false. You can export your data in a variety of formats. There are also third party solutions for migrating FileMaker schema and data to other database systems.
Score: 9 Votes (Like | Disagree)

pgiguere1
That's a pretty bad copy-paste job they did here with the rMBP screenshot.
Score: 8 Votes (Like | Disagree)

DonMega
They need to spin Aperture and the other "Pro" software off into their own subsidiary like they did Filemaker. Where the hell is Aperture 4.0?
Score: 7 Votes (Like | Disagree)

They need to spin Aperture and the other "Pro" software off into their own subsidiary like they did Filemaker. Where the hell is Aperture 4.0?

I'd say the reverse, suck Claris / FileMaker back into Apple, their prices are ridiculous compared to Apple's in-house pro software and not in the same league.
Score: 6 Votes (Like | Disagree)

jscooper22
I've been developing FileMaker since 1994 (v2.1). It's fascinating to see the lengths people go through to disparage a piece of software they clearly don't understand or just don't like.

FileMaker doesn't make files or make forms. It is a database system that can be run on a single machine, served to a small number of clients from that same machine, or loaded onto a server so other systems and platforms can talk to it. It can connect (and be connected) via ODBC. Data can be imported and exported to just about anything, and there's a PHP engine to handle data calls from the web.

What I've noticed over the years, is that many of it's users are people who wander into the Apple Store or Best Buy and say "I need a database" and are handed FileMaker. A solution can literally be built in a matter of minutes (it'll be ugly, but it'll work). It can grow in size and complexity until the user hits a knowledge wall and needs to call a consultant (which I was for many years).

OK, maybe I sound like a commercial. But like I said I've been using this thing for nearly 20 years. During the same time I've also developed in Sybase, SQL Server, Access, VB, PHP, etc. FileMaker is far and away my favorite. I currently manage an IT Dept for an architecture firm and FileMaker is one of our key pieces of software along with suites from Microsoft, Adobe and Nemetchek. When someone asks me if a program exists to do X, often I tell them "Nope. But we can make one!"

If you come from a traditional database world, it takes some getting used to. The IDE and the UI are the same app; there's a "table occurrence" concept that makes context very important, and, like most systems, there are times when you think "why the heck should I need to spend a day working around the way it does THIS?" But overall, it's saved my firm, and my past clients, more time and money, and with fewer pains, than trying something in Access, Oracle or anything else.

Here ends my Monday Morning Rant. Have a nice week. :)