Google took advantage of a loophole in Safari's privacy settings designed to prevent placement of third-party cookies by default, using invisible web forms to trick Safari into thinking that users had interacted with Google's ads and thus allowing cookies to be placed on the device. 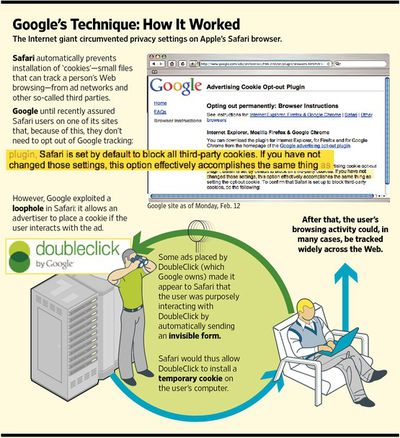 Graphic from The Wall Street Journal

"Consumers should be able to know whether there are other eyes surfing the web with them," [New York Attorney General Eric] Schneiderman said in a statement. "By tracking millions of people without their knowledge, Google violated not only their privacy, but also their trust."

Google said it was pleased to reach the settlement. "We work hard to get privacy right at Google and have taken steps to remove the ad cookies, which collected no personal information, from Apple's browsers," a spokeswoman said by email.

Jayse
Giant two-faced snake of a company. They'll never change while there is value in user data...
Score: 16 Votes (Like | Disagree)

rshoff
Wow, 17million. What a punishment! Ya know, hackers get sent to jail for years when they breach a corporate server. Why does Google get off so easily for hacking millions of personal computers residing in people's homes with their security settings set for privacy?! Let me answer that, they shouldn't.
Score: 13 Votes (Like | Disagree)

clarsen
This is all well and good that the states settled, but I was the one that "suffered" so where is my money?:confused:
Score: 12 Votes (Like | Disagree)
Read All Comments