The update adds support for the iCloud Keychain service that was added in OS X Mavericks, as well a numerous bug fixes including a calibration issue with the iPhone 5s accelerometer. 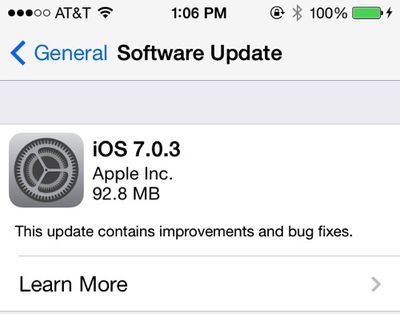 - Adds iCloud Keychain to keep track of your account names, passwords, and credit card numbers across all your approved devices
- Adds Password Generator so Safari can suggest unique, hard-to-guess passwords for your online accounts
- Updates lock screen to delay display of "slide to unlock" when Touch ID is in use
- Adds back the ability to search the web and Wikipedia from Spotlight search
- Fixes an issue where iMessage failed to send for some users
- Fixes a bug that could prevent iMessage from activating
- Improves system stability when using iWork apps
- Fixes an accelerometer calibration issue
- Addresses an issue that could cause Siri and VoiceOver to use a lower quality voice
- Fixes a bug that could allow someone to bypass the Lock screen passcode
- Enhances the Reduce Motion setting to minimize both motion and animation
- Fixes an issue that could cause VoiceOver input to be too sensitive
- Updates the Bold Text setting to also change dial pad text
- Fixes an issue that could cause supervised devices to become un-supervised when updating software

The new Reduce Motion effect could assuage the concerns of many users who found the new parallax and other effects in iOS 7 to be visually unsettling. MacStories posted this video showing the new, more subtle cross-fade effect. Reduce Motion is accessible in Settings/General/Accessibility/Reduce Motion.

no update for iPhone 5, wtf

I hate the parallax effect. BUT I generally like the transition animations. I'm conflicted about the update to the "reduce motion" setting; to me it removes some important context cues when opening folders or apps zooms to the relevant place.

I think Apple should separate disabling of parallax and transition animations in a future update.
Score: 11 Votes (Like | Disagree)

3d parallax efffect much much much much (!!) improved - jittery motion seems to be eliminated.
iCloud keychain works. :-)
Absence of "slide to unlock" on lock screen is a nice feature
Score: 8 Votes (Like | Disagree)

socbrian
WHY MUST I NEED WIFI.... I have unlimited data.... let me do what I want apple.
Score: 8 Votes (Like | Disagree)

musika
Now this is what I was looking for!
Score: 8 Votes (Like | Disagree)
Read All Comments