As the beginning of the holiday shopping season grows closer in the United States, ifoAppleStore is reporting that several high-profile Apple Stores around the country will be be open on Thanksgiving Day in order to help drive sales for the company. The move marks an expansion from last year, when only a pair of tourist-heavy Apple Stores in Honolulu and Las Vegas were open on Thanksgiving, with Apple working on arrangements for employees to take on holiday shifts. 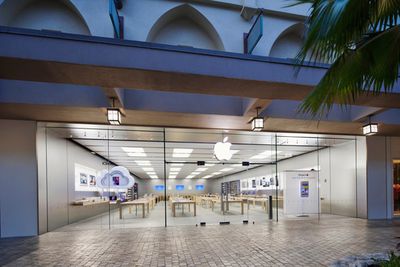 Apple Retail Store located at the Ala Moana Center in Honolulu, Hawaii

According to insiders, over the past few years several Apple retail market directors have been advocating for more stores to be open on Thanksgiving, believing the company was missing out on substantial holiday sales. Apparently their viewpoint prevailed this year, and at least 10 stores will be open some portion of Thanksgiving. Employee schedules to cover the holiday shifts were being prepared over the last two days. Other retailers have drawn criticism from employees for their open-on-Thanksgiving policy, saying it takes them away from their families on the holiday. However, the retailers have said they will try to accommodate employees with alternate time off.

While the list of stores scheduled to be open on Thanksgiving may still expand, it currently includes the following locations:

Apple's retail stores posted strong results last quarter, posting $4.5 billion in revenue during the timeframe. The company also traditionally begins the holiday shopping season at its locations with a one-day shopping event during the traditional Black Friday kickoff to the holiday shopping season, which falls this year on November 29. Big box retailers such as Target, Walmart and Best Buy have already advertised upcoming discounts on popular Apple products, with more deals expected to be announced in the coming weeks.

Update: ifoAppleStore has updated its report to state that upon learning of the effort to open stores on Thanksgiving, Apple CEO Tim Cook has canceled it, citing the need for employees to be with their families.

Elbon
The whole concept of Black Friday is ridiculous to begin with. This is just obnoxious.

The holidays are supposed to be about family, not sales.
Score: 16 Votes (Like | Disagree)


Update: ifoAppleStore has updated its report to state that upon learning of the effort to open stores on Thanksgiving, Apple CEO Tim Cook has canceled it, citing the need for employees to be with their families.

If it's not profitable, the stores will stay shut on the holidays.

Everybody stay the hell home on Thanksgiving, you don't need an iDevice that badly.......
Score: 13 Votes (Like | Disagree)

Koodauw
Come on Tim, time to put families before sales. I know you give the employees other time off to make up for it, but Im guessing most families won't gather like everyone can on Thanksgiving.

Certain people will have to work thanksgiving regardless, but retail shouldn't be one of them.

Delorean2006
what a complete shame on all these companies opening earlier and earlier every single year, they have completely lost the whole idea of the holidays and forgot what they're about, they're about families! not your wallets! and being selfish and buying stupid things, family is way more important then going out and fighting people for things
Score: 8 Votes (Like | Disagree)

johnparjr
Others doing things behind the CEO's back Good for Tim for shutting down that idea down.


"upon learning of the effort to open stores on Thanksgiving, Apple CEO Tim Cook has canceled it, citing the need for employees to be with their families."
Score: 7 Votes (Like | Disagree)
Read All Comments

Tuesday September 27, 2022 8:05 am PDT by Hartley Charlton
An Apple Watch Ultra user has modified their new device's casing to add a brushed finish and remove the orange color of the Action Button in an effort to make it more visually appealing. The Apple Watch Ultra offers the first complete redesign of the Apple Watch since the product line's announcement in 2014, and while the design has been met with praise from many users, some have criticized...
Read Full Article • 155 comments