Apple's California-based AppleCare warehouse is used as a repair hub, with Apple retail locations across the country shipping damaged products to the facility, where they are repaired or replaced and shipped back out across the United States. 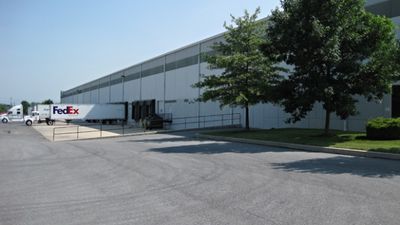 Apple's Pennsylvania warehouse
This second warehouse will serve a similar purpose, expanding Apple's repair capabilities and turnaround time. Damaged items once shipped to California will now be able to be fixed at either location, which will likely result in faster repair and shipping times for consumers located in the Midwest and on the East Coast.

Along with opening a new repair facility, Apple has also been working to cut down on costs and decrease repair times by performing more iPhone repairs in-house, electing to replace displays and other parts in Apple Stores and at Apple Authorized Service Providers rather than offering replacements.

In August, Apple launched a redesigned AppleCare website that includes a simpler interface and 24/7 live chat support. The company is also said to be working on significant changes to its AppleCare services, aiming to switch to per-user AppleCare subscription plans rather than offering per-device coverage.

then we would have better names than maverick
Score: 5 Votes (Like | Disagree)

This was certainly kept quiet...

I mean, with the new data centers that have come online, we've heard about them for months ahead of their construction.


Indeed! I'm in NYC, and imagine my surprise when I got my iPhone mail-in warranty service shipped from PA last week! :)
Score: 1 Votes (Like | Disagree)

mindstream
I live Carlisle! Not that it means anything...just saying.
Score: 1 Votes (Like | Disagree)

mingoglia
Maybe they should work a bit harder on making the equipment not fail in the first place, then they wouldn't need this fancy new facility? :D
Score: 1 Votes (Like | Disagree)

There is also an AppleCare repair depot in Texas, near Houston. Unless all those MBP's I've been sending to TX are really going to CA.


Agreed. I have sent many a mac to that repair depot article should be updates for accuracy... :\
Score: 1 Votes (Like | Disagree)

KirkTheJerk
This is not a new apple warehouse. Apple has been located at this warehouse for a couple of years now. I think it was mainly a small distribution center. The other company that shared this warehouse with them moved locations and apple must have leased the rest of the warehouse.
Score: 1 Votes (Like | Disagree)
Read All Comments