New touch screen testing conducted by Finnish technology company OptoFidelity has suggested [PDF] the touch displays of Apple's iPhone 5s and iPhone 5c are less accurate than the display of the Samsung Galaxy S3, but the testing has failed to take into account that Apple has designed its iPhones to compensate for different usage angles.

Using its proprietary OptoFidelity Touch Panel Performance Tester, which compares the coordinates of touches by a robot with an artificial finger to coordinates from a touch device, the company measured the accuracy of both the iPhone 5s, the iPhone 5c, and the Galaxy S3. The video below demonstrates how the testing was carried out.


The test assigned a PASS/FAIL score when the actual touch position registered greater than ±1 mm off from the reported coordinates from the artificial finger, marking passes with green dots and fails with red dots. According to the test, both of Apple's iPhones demonstrated "extremely bad" performance near the edges and the top of the screen. 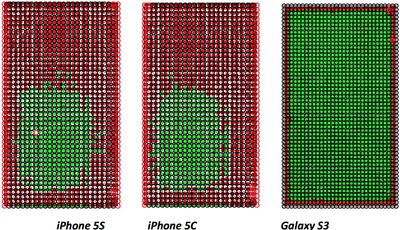 OptoFidelity suggests that this impacts both top and edge screen functionality, making it more difficult to perform tasks like accessing the Q and P keys on the virtual keyboard as they are located towards the edges of the display, but machine testing does not replicate real world usage, where the phone is held at and viewed from various angles.

iOS is designed to compensate for the angle that it expects a phone to be held at, which suggests that some of the discrepancies between screen accuracy between the iPhone 5s/5c and the Galaxy S3 may be intentional on Apple's part, in order to provide a better experience for users that are not holding their phones in static positions.

Testing functionality such as web browsing opening time and camera application opening time revealed that the iPhones were more responsive than the Galaxy S3, with the iPhone 5s registering slightly faster response times.

iSee
Once again Apple thumbs its nose at the robot market :mad: ;)
Score: 20 Votes (Like | Disagree)

H2SO4
Shouldn't they be testing against a GS4?
Score: 20 Votes (Like | Disagree)

atzeX
It is intentional by Apple.

Try to touch some buttons if the UI is upside down... difficult, isnt it?

(Apple offsets the touch so that your eye-finger-button line is straight on the target)
Score: 16 Votes (Like | Disagree)

204353
These tests mean nothing because the iPhone actually registers touches slightly above the centre of where you put your fingertip, an intentional compensation to make it prefer the 'tip' of your finger, rather than the middle of the contact area.

Try tapping buttons with your iOS upside-down (with orientation lock on) and you'll see how different it is. I know the article kinda mentions this feature, but I thought I'd make it clear how it actually works.
Score: 15 Votes (Like | Disagree)

polterbyte
Yes, because that's EXACTLY how everybody uses their phones: with an artificial finger dangling from a robot arm. /s

Prepare for touchscreenprecisiongate, about which absolutely nobody is complaining.

Carlanga
Just an observation: There is a thread here in the forum since A.M. about it (not mine), maybe ~4 hours before this front page post. Lately MR keeps taking thread subjects from the sub forums and then making it a new rumor w/out mentions.

Either way, the test is interesting.
Score: 12 Votes (Like | Disagree)
Read All Comments