The iPhone's touch screen has a much faster response time than its Android and Windows counterparts, according to a new set of TouchMark benchmarks from cloud streaming company Agawi.

Using a 240fps high frame rate camera along with a custom-built device called a Touchscope, Agawi measured the App Response Time (ART) of several different smartphones. The ART is the latency experienced between the time a user touches the device display to the device’s on-screen response.

Apple’s iPhone demonstrated a minimum app response time (MART) of 55 milliseconds, a much better performance than the Galaxy S4, which had a MART of 114ms. The Lumia 928 had a similar high MART time of 117ms, and the iPhone 5's closest competitor was the iPhone 4, with a MART of 85. The HTC One and the Moto X had the highest MART times, coming in at 121 and 123ms, respectively. 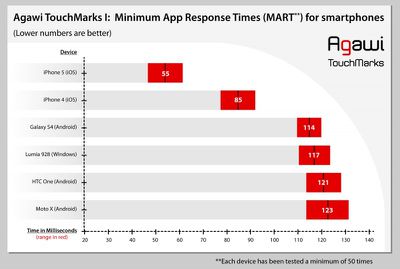 Relan, Agawi CEO, spoke to Venturebeat about the company's benchmarks.

"App responsiveness is judged by how quickly the app can respond to your inputs," said Rohan Relan, cofounder and CEO of Agawi. "Smartphones with touchscreens that have lower MART scores feel snappier. This is probably why, to many users, the iPhone keyboard feels more responsive than an Android phone keyboard."

Microsoft has published a video that demonstrates how the differences between various touch screen response times translate into real world device experiences. As seen in the video, there is a noticeable difference between a 100ms latency time and a 50ms latency time.


Agawi speculates that Apple's touch screen hardware is better calibrated for capturing and processing touch than the Android and Windows devices that it was compared to. The company does note, however, that more comprehensive testing is required, and that coding differences may have slightly altered the results.

In the future, Agawi plans to develop additional TouchMark tests, releasing both the hardware and software behind the benchmarks so that its results can be replicated. The company also plans to test additional Apple devices, including the newly released iPhone 5s and iPhone 5c.

keysofanxiety
Who cares about screen speed? I've got a hex-core 6.5GHz ARM Z4-X345 with 64 petabytes of RAM, AND an SD card and removable battery.

Sure, my phone still lags now and then -- when doing CPU-intensive tasks such as going back to the lock screen -- BUT SPECS MEAN EVERYTHING! (except for if the specs are in Apple's favour, such as here)
Score: 84 Votes (Like | Disagree)

Col Ronson
im not surprised. might be bias, but everytime i use an android phone, it feels clunky and slow.
Score: 76 Votes (Like | Disagree)

Chuck-Norris
wow, thought all capacitive touch screens were essentially the same. i guess apple does have an edge
Score: 33 Votes (Like | Disagree)

likemyorbs
I have the new Nexus 7 tablet, it definitely does not feel nearly as responsive as my iPhone. I don't care what android apologists say, android is definitely clunkier and not as polished and responsive as iOS.
Score: 31 Votes (Like | Disagree)

baryon
I'm glad someone actually did a test on this. I sometimes feel like most people just don't care about or even notice lag. For me, it simply drives me crazy. If a mouse pointer, brush, or UI element lags, it really pisses me off and it makes everything feel annoying and slow. Your brain tries to evaluate your movements in real-time, and adjust your hand accordingly. If there's lag, you cannot adjust your movement as accurately.

Apple does a great job at reducing such lag and it makes their products feel far more responsive, even if the actual processing time for tasks is the same. Take for example scrolling on a Mac trackpad vs. scrolling on a Windows trackpad. The former feels like you're actually moving the content with your fingers, while the latter feels like you're constantly being punched in the face by Mike Tyson.

These things mean nothing to someone who simply isn't sensitive to it, which is why lots of people don't mind having laggy devices, and they will tell you that they don't notice any lag, while you can clearly tell the difference.
Score: 28 Votes (Like | Disagree)

d4rkc4sm
can they test my pos garmin gps' touchscreen

i want to laugh
Score: 21 Votes (Like | Disagree)
Read All Comments

Wednesday January 26, 2022 8:56 am PST by Joe Rossignol
Benchmark results have started to surface for MSI's new GE76 Raider, one of the first laptops to be powered by Intel's new 12th-generation Core i9 processor. Intel previously said that its new high-end Core i9 processor is faster than Apple's M1 Max chip in the 16-inch MacBook Pro and, as noted by Macworld, early Geekbench 5 results do appear to confirm this claim, but there are several...
Read Full Article • 230 comments