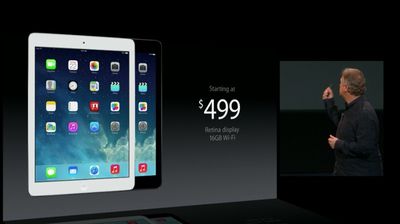 Along with a redesigned chassis, the new iPad includes a 2048x1536 Retina display with a film-based sensor and an upgraded 64-bit A7 processor alongside the M7 motion coprocessor, plus a 5-megapixel rear iSight camera and a next generation FaceTime HD camera with improved backside illumination for better low-light performance.

With the A7 chip, the iPad Air offers twice the CPU and graphics performance of the previous iPad. The 64-bit architecture supports Open GL ES version 3.0, for "game console-like visual effects."

"iPad created an entirely new mobile computing experience, and the new iPad Air is another big leap ahead. It is so thin, light and powerful, once you hold one in your hand you will understand what a tremendous advancement this is,” said Philip Schiller, Apple's senior vice president of Worldwide Marketing. “iPad Air with its 9.7-inch Retina display weighs just one pound and packs the incredible performance of iOS 7 running on a 64-bit desktop-class Apple A7 chip, and delivers all-day battery life in the lightest full-sized tablet in the world."

The iPad Air continues to offer up to 10 hours of battery life and is available in capacities ranging from 16 GB to 128 GB. U.S. Pricing remains the same as previous models, at $499/$599/$699/$799 for Wi-Fi versions, plus an additional $129 for comparable cellular versions. The iPad Air will be available on November 1 at 8 a.m. local time in the United States and more than 40 other countries in Europe and Asia.

The iPad Air will replace the current full-sized fourth-generation iPad, but Apple will continue to sell the iPad 2 at $399 for the 16 GB model. Alongside the iPad Air, Apple has also announced new Smart Covers and cases designed to fit the smaller chassis.

keysofanxiety
The price they're selling the iPad 2 at is nothing short of immoral.
Score: 84 Votes (Like | Disagree)

cRuNcHiE
Why would anyone buy the iPad 2nd gen for $100 less than the 5th gen?

redscull
So.. iPad Air got better dimensions and weight, and that's about it. Same processor as a phone. It may be a great processor, but iPad pushes a lot more pixels. Will it even be as fast?

Better wifi is pointless. It's wifi was already faster than the internet pipe, the limiting factor. No better camera. Same crippling base storage size. No fingerprint sensor. Probably same RAM (have to wait for a tear down).

tann
Did anyone see that name change coming?!

musika
I definitely see a bigger 13-inch iPad Pro coming now. If not, what in the world is up with this name?
Score: 30 Votes (Like | Disagree)
Read All Comments