The Apple Store will be in an open-air center known as "The Shops at Nanuet," which has recently undergone an extensive redevelopment. The mall’s grand opening will take place on Thursday, October 10, which is the same day the Apple Store will open. In addition to an Apple Store, the center includes a number of other stores and restaurants, along with a movie theater. 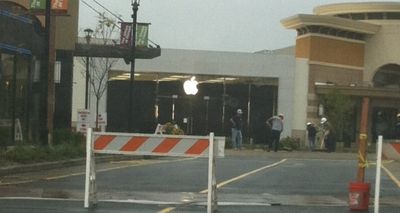 At its store openings and relocations, Apple typically hands out commemorative T-shirts to the first 1,000 customers to visit the store. Customers can begin making reservations for workshops and Genius Bar appointments at the new Nanuet store today.

I live in Rockland County and have followed the development of The Shops At Nanuet (TSAN) extensively. There has been a lot of secrecy about some of the stores moving in. The fact that the Apple store was relocating from the Palisades Mall to TSAN was only made semi-public last week; many people are still unaware of the change.

TSAN was built at the site of the old Nanuet Mall which fell into disrepair and desertion after the Palisades Mall opened some ten years ago. Now it's the other way around; Palisades is losing occupants to TSAN.

The new location is being touted as an upscale, modern shopping attraction as opposed to a mall. It makes sense that Apple would want to be associated with the new, chic conglomeration of hip stores that TSAN claims to be.
Score: 3 Votes (Like | Disagree)
Read All Comments