Apple's Vice President of Worldwide Government Affairs, Catherine Novelli, has been nominated to serve as Under Secretary for Economic Growth, Energy, and the Environment, according to an announcement from The White House (via AllThingsD). 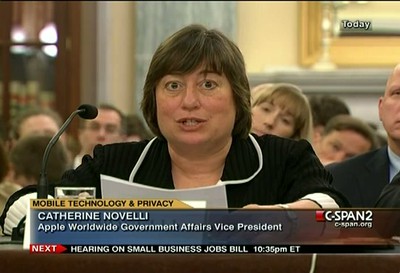 Catherine Ann Novelli is Vice President of Worldwide Government Affairs at Apple, Inc., a position she has held since 2007. Previously, Ms. Novelli was a partner at Mayer, Brown, Rowe & Maw, LLP from 2005 to 2007. From 1991 to 2005, she served at the Office of the United States Trade Representative and from 1997 to 2005, she was the Assistant U.S. Trade Representative for Europe and the Mediterranean.

Novelli, who works in Washington D.C., currently heads up a team at Apple that handles the company’s federal, international, and state government relations. She has been with the company since 2007, and it remains unclear if she will leave her position at Apple to take up the new post.

chipchen
There had to be a better picture of her...
Score: 17 Votes (Like | Disagree)

portishead
That's the best photo you guys could find of her??
Score: 7 Votes (Like | Disagree)

Novelli, who works in Washington D.C., currently heads up a team at Apple that handles the company's federal, international, and state government relations.

I think I speak for everyone when I ask, "Apple has a team that handles federal, international, and state government relations?"

I'm really getting tired of this whole "revolving door" policy in Washington. That said I don't know much about this candidate so I'll withhold judgement in this case.
Score: 5 Votes (Like | Disagree)

autrefois
Are you sure this isn't actually for some post in Ireland? I thought Apple was an Irish company (https://forums.macrumors.com/showthread.php?t=1483686). :p
Score: 5 Votes (Like | Disagree)

Klae17
She looks as surprised as we are.
Score: 4 Votes (Like | Disagree)
Read All Comments

Tuesday May 11, 2021 5:06 am PDT by Hartley Charlton
Apple's next MacBook Air will feature a completely new design and come in a range of colors like the 24-inch iMac, according to leaker Jon Prosser, who has now released supposedly accurate renders of the new machines based on leaked images. In a new video uploaded to YouTube channel Front Page Tech, Prosser elaborated on his previous prediction that Apple's next-generation MacBook Air models ...
Read Full Article • 57 comments

Tuesday May 11, 2021 11:56 am PDT by Joe Rossignol
Last month, Apple introduced a new iPad Pro with the same M1 chip found in the latest Macs, and early benchmark results indicate that the M1 iPad Pro is over 50% faster than the previous-generation iPad Pro. Based on five legitimate Geekbench 5 results (here's the fifth) for the fifth-generation 12.9-inch iPad Pro with the M1 chip, the device has average single-core and multi-core scores of...
Read Full Article • 207 comments