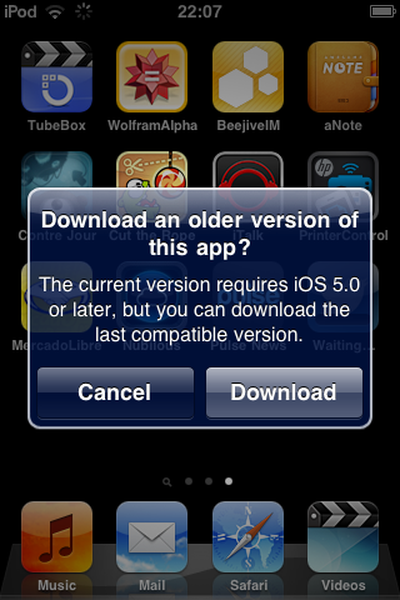 The move comes as Apple is set to release iOS 7 tomorrow, with the new operating system featuring a complete redesign along with a number of new features including an overhaul of multitasking, a new universal settings window known as Control Center, and changes to the Notification Center. With all of the changes coming in iOS 7, some developers are redesigning their apps to be compatible with only iOS 7, and Apple's new system offers one way for users who have yet to upgrade to iOS 7 to continue using apps while also providing reminders that they are not running the most current version of iOS.

iOS 7 will be avaliable for free and will be compatible with the iPhone 4, iPhone 4S, iPhone 5, fifth-generation iPod touch, iPad 2, iPad with Retina Display (third- and fourth-generation), and the iPad mini, along with Apple’s new iPhone 5c and iPhone 5s.

Xenomorph
With MILLIONS of devices "forever" stuck on iOS 3, iOS 4, iOS 5, and now iOS 6, being able to still download apps is a VERY good thing.
Score: 20 Votes (Like | Disagree)

Xenomorph
This is one of the biggest things to happen to iOS. Ever.

This was a BAD thing. It required users to maintain their own app archive. Saving old versions would take up an insane amount of disk space, and referring to changelogs and release notes to try and figure out which version worked on your device & iOS combination was time-consuming.
Even if you did manage to back up and save EVERY download, it wouldn't help the user in Scenario 1, as they never had a chance to download and backup the app.

This basically forces older, but still perfectly capable devices to become useless. Whereas you once had a hundred apps that worked fine, you would be reduced to using only the built-in apps. No more Twitter, Facebook, Angry Birds, Around Me, Instagram, etc.

Compare this to Android:

Any user can install any app, at any time. Was the 2.0 version of the app the last one that ran on your device? Just get a copy from someone else. Done. No DRM. Piracy is a huge problem, but it makes it easy to install any version of apps, which means even your old/unsupported device will ALWAYS be able to download your favorite app again.
Score: 20 Votes (Like | Disagree)

kalsta
Unbelievable!! I was only just complaining to an Apple Store genius about this very issue last week (not why I was there). IMO this was the most genuine case of planned obsolescence in all of Apple's behaviours. So glad to see them finally fix this!!

Going off to see if this actually works on my old 3G now…
Score: 17 Votes (Like | Disagree)

Rogifan
So does this mean the iOS 7 haters can stay on iOS 6 now? :)
Score: 12 Votes (Like | Disagree)
Read All Comments