The Moto X is the first phone where Google is in control of both the hardware and the software, giving the company greater control over the end user experience. Google's Moto X does not utilize a skin like other Android smartphones, but Google does allow carriers to add pre-loaded apps and other software. There will, however, be a Google Play edition available for users who prefer a stock Android experience.

The phone includes the Motorola X8 Computing System, with a Snapdragon S4 Pro processor, 1.7Ghz dual-core Krait CPU and quad-core Adreno 320 GPU. It offers 2GB of RAM, 16GB of storage, a 10-megapixel rear camera, and a 2,200mAh battery that offers up to 24 hours of battery life. 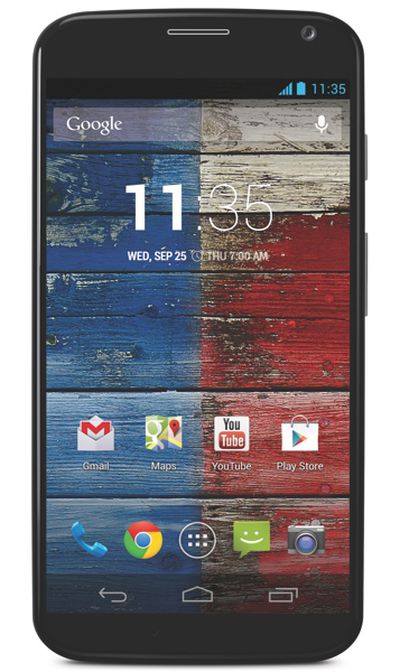 To support its Touchless Control feature, the phone includes a dedicated processor that listens for voice commands while preserving battery life. This feature allows users to obtain weather information, directions, and more with hands-free controls.


Motorola's Moto X also offers a unique "Quick Capture" camera functionality, opening the camera app with a wrist flick. Once open, a picture can be snapped by touching anywhere on the screen.

Though the Moto X is available through multiple carriers, customers purchasing an AT&T version of the phone will be able to customize it, choosing a black or white faceplate with sixteen different back case color options and accents.

The Moto X is set to launch in late August or early September and will be priced at $199 with a two-year contract.

forwardthinking
Google servers listening on every conversation  waiting for a command? no thank you.
Score: 106 Votes (Like | Disagree)

czeluff
For a moment I thought I was on a website that focuses on Apple news and rumors.
Score: 54 Votes (Like | Disagree)

Google servers listening on every conversation  waiting for a command? no thank you.


Actually that initial "waiting for a command" happens locally. Then when you say the keyword 'Ok, Google Now...' it records the rest of it which then gets processed on the server.

I'm with you, still creepy but facts are facts.
Score: 44 Votes (Like | Disagree)

There's an option in settings ya know ;)....just bring your iPhone up to your ear and start talking.

gooberwilson
This is the first android phone that makes me seriously consider switching to android. Hardware an software controlled by google is a big move.
Score: 37 Votes (Like | Disagree)
Read All Comments