Apple was awarded a U.S. patent on Tuesday that appears to covers a way for iPhone users to share content with each other when phone calls are placed on hold.

The patent, number 8,494,123, is for an "on-hold visual menu from a user's communication device" and describes a system that shares a variety of content like pictures, music, videos, upcoming calendar events, and location information to the person that is being put on hold. For example, someone put on hold could look through the other caller's public Photo Stream. 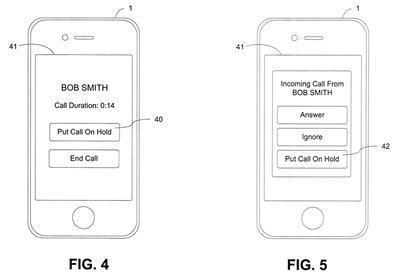 Additionally, privacy settings allow certain types of data, such as location or photos, to be limited within a specific group of people (for example, family members) while automatically sharing other content with all users placed on hold. Content can also be personalized to each specific caller.

When an iPhone owner is ready to continue a call, an on screen message, audible tone, or vibration will occur, alerting the on-hold user that the call will be resumed.

As with all Apple patents, there is no guarantee that the on-hold sharing feature will make it into a final product.

donutbagel
Bob Smith, who are you, and what have you done with John Appleseed?
Score: 27 Votes (Like | Disagree)

Zodiac.mj
Oh my god, patents are the most stupid thing on earth. I don't know how you can breath easily in US - there is no patent for TAKING A BREATH? You're not paying, so you can't use that feature...
Score: 21 Votes (Like | Disagree)

samcraig
You know what else works. Having patience until the party can resume the call. Or call back.

Also I've heard that iMessage, WhatsApp, Email and other such apps can send pictures, video, audio, etc while you're not only on hold - but during the call as well. AMAZING!
Score: 13 Votes (Like | Disagree)

Porco
This makes me want to gouge my eyes out with a pencil brb,

lighthouse_man
When someone puts me on a hold, I'm expecting to have to wait less than 30 seconds before hanging up. If someone starts streaming a picture slideshow or a video to me, I'm probably hanging up as soon as it starts.
Score: 7 Votes (Like | Disagree)


More like protect ideas from being stolen from someone else...:rolleyes:
Score: 5 Votes (Like | Disagree)
Read All Comments