Two weeks after Apple released the first beta version of iOS 7 following its unveiling at the company's Worldwide Developers Conference, Apple has just released a second beta for testing. The update is currently available through Apple's over-the-air updating system on iOS devices, and should be posted soon to the iOS Dev Center. 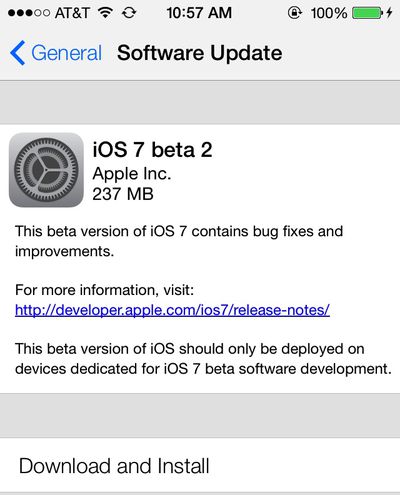 iOS 7 is scheduled for release in the fall of this year, undoubtedly alongside new iOS hardware. Apple's iPhone, iPad, and iPad mini will all be due for updates in the latter portion of this year, and if past history is any indication iOS 7 should be made available to the public just a few days before the launch of the next-generation iPhone.

Updates on changes in beta 2:

- Beta 2 is available not only for iPhone and iPod touch, but also iPad and iPad mini. The first beta released alongside the WWDC keynote did not include official iPad support, with Apple announcing that iPad versions of iOS 7 would follow in the coming weeks.

- The new male and female Siri voices showed off by Apple at WWDC are now available in English.

- Multiple users are reporting that Siri is much faster than in beta 1.

Direct links
(You must be a paid registered Apple developer to access these links.)

Please tell me the 9 year old kids that designed the icons have grown up to be atleast 21 now.

Menopause
Please tell me the 9 year old kids that designed the icons have grown up to be atleast 21 now.
Score: 41 Votes (Like | Disagree)

willryan42
Can we please stop fighting about app icons for a phone? This has become incredibly blown out of proportion... IT'S A SQUARE PICTURE ON A SCREEN. That's it! I can't believe people are saying things like "Oh my god I'm switching to Android because of the new icons." Seriously? Grow up.
Score: 27 Votes (Like | Disagree)

Noticed the dock is always blue regardless of background. As are folders. Compare beta 1 (left) to beta 2 (right) which shows the dock (font text is also still mostly illegible with this background):

And the folder color:

Also seeing a bunch of graphical redraw artifacts, in particular horizontal lines/flickering near the dock when exiting apps.


Looks like they're using not only adaptive color technology, but adaptive general taste tech, too. If you pick a butt-ugly wallpaper, it adjusts the OS to be more butt-ugly as well.
Score: 24 Votes (Like | Disagree)