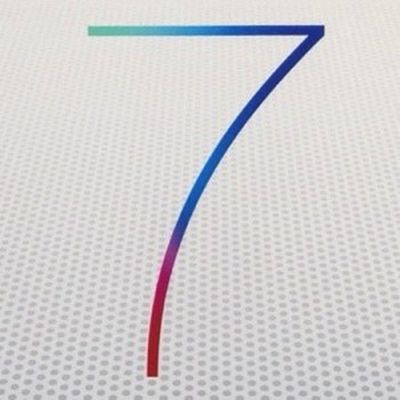 Apple has released the first build of the iOS 7 Beta to developers, ahead of what is likely to be a long summer of beta testing.

The first build, number 11A4372q, was released for the iPhone 5, 4S and 4, along with the fifth-generation iPod Touch and new betas for the Apple TV and a beta of Find My iPhone. Apple also released the first build of the Xcode 5 Developer Preview.

Devices should be backed up using iTunes or through iCloud prior to installation of iOS 7, and following installation, can be restored through either process.

Download Links (Users must be a registered Apple developer to use these):

downpour
My attempt at making the icons less hideous.
Score: 16 Votes (Like | Disagree)

How can I get this not being a developer?

A couple of things I've noticed so far while running it on an iPhone 4:

- Clock icon is live, shows correct time with a moving second hand
- Newsstand icon can be moved into a folder
- Wallpaper doesnt "move" but then that's probably down to it not having a retina screen
- Same for the Weather icon, backgrounds don't move but again, probably due to non-Retina screen
- It's pretty quick, a bit laggy in places but nothing major.

So far, a good release for the entry level iPhone model. If I find anything else, I'll report back!


iphone 4 has retina screen but there are no animations because its a 3.5 year old CPU :)
Score: 9 Votes (Like | Disagree)

The installation was a breeze! The download speed was extremely fast after hours of Gateway error on Apple's dev site...

Some of my top issues:

1. I don't like the genie effect when you exit and app or enter a folder. It looks "low quality"
2. Some icons look low-quality, kind of fuzzy.. I am not sure how to describe it, like seeing something not optimized for retina. e.g. the phone icon. Maybe I am just crazy.
3. it's kind of laggy in some instances which is understandable as this is first public seed.
4. In photo, when you zoom all the way out in the "photos" mode, everything looks overlapped and jammed together. Must be a UI bug of some sort. This is the same as Calendar event. Time stamps will overlap if current time is very close to the hourly time marker.