Another Working Apple 1 Heads to Auction with $500,000 Estimate

The Associated Press reports that yet another working Apple 1 from 1976 is headed to auction, with Christie's placing a $300,000 opening bid and $500,000 estimate on the machine. The machine is owned by Ted Perry, a retired school psychologist from Sacramento, California who acquired it in a swap over three decades ago.

He paid nothing for it; it was a swap with the owner.

"I traded some other computer equipment I had for the Apple 1," he said.

Perry has kept the machine, which is essentially a single circuit board paired with aftermarket components such as a monitor, keyboard, and tape storage, in a cardboard box, and only recently confirmed that it still functions. 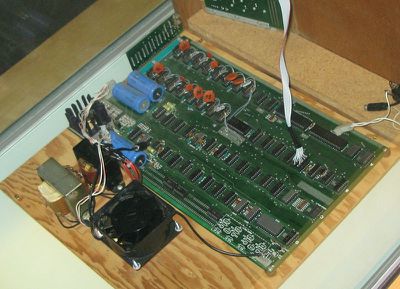 Apple 1 circuit board (Source: Wikimedia)
Perry's Apple 1 is one of only a handful of the machines in existence still in operation, although several others have been auctioned over the past year or two. Just last month, one sold for the equivalent of a record $671,400 at auction in Germany.

The online auction for Perry's Apple 1 begins on Monday, June 24 and runs through July 9. The machine will be on display at the Computer History Museum beginning on Monday.

Should I buy now or wait?

ajo
Should I buy now or wait?
Score: 6 Votes (Like | Disagree)

So its just the Apple 1 circuit board? I'm confused...


That is all Apple sold. It was up to the user to build a case and add the other parts.
Score: 3 Votes (Like | Disagree)

At the time, he was working as a psychologist in a school in Carmichael, a town near Sacramento. While observing special needs children, he noticed that a teletype machine "made a huge difference" in how a deaf boy using it responded and learned.

As the first computers came on the market, Perry learned to program them. Then he approached Wozniak, who agreed to provide what the psychologist calls Apple's "internal code" so he could create interactive lessons for his students using the new technology.

UnfetteredMind
Should get a nice payout for keeping it around in a cardboard box for nearly 35 years.
Score: 2 Votes (Like | Disagree)

is it really worth 500 grand? isn't it better to donate that money?

Um, it's worth whatever someone is willing to pay for it. As to whether or not it is "better" to donate that money, first it must sell, then the sellers should decide for themselves what to do with the proceeds. It shouldn't be a community decision.
Score: 1 Votes (Like | Disagree)
Read All Comments