Intel introduced a 128GB Thunderbolt thumb drive at the Computex trade show in Taipei today, reports PCWorld. The drive, which Intel is calling the "world's fastest thumb drive," is similar in size to a standard flash drive and does not require an expensive Thunderbolt cable to connect to a Mac or PC. 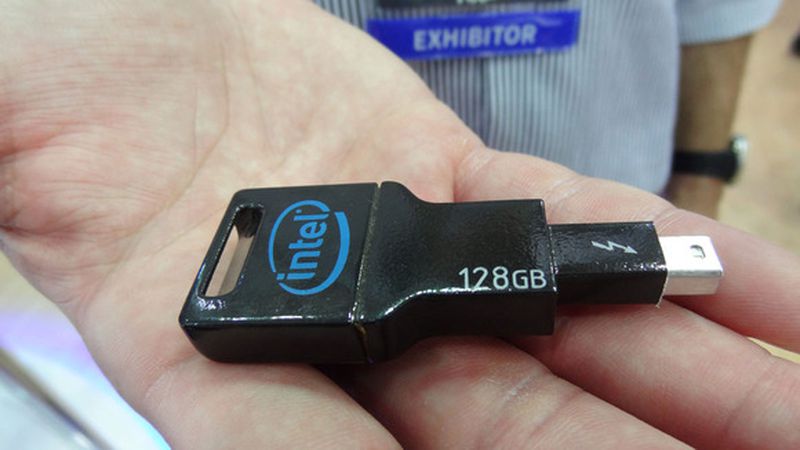 This is one of the first thumb drives demonstrated using Thunderbolt connectivity, which is the fastest technology available to transfer data between computers and peripherals, said Oren Huber, a Thunderbolt engineer at Intel Israel.

Thunderbolt can transfer data at a speed of 10Gbps, which is faster than USB 3.0 and USB 2.0. Right now USB 3.0 is about half the speed of Thunderbolt.

Intel's thumb drive uses a SanDisk SSD for storage, though that may change if the product goes into production. At this point, the thumb drive is just a prototype, with no potential price point provided.

techpr
The most expensive Thumb Drive on the Planet.
Rating: 12 Votes

That is insane, you could transfer the entire contents of the Thumb Drive in under 5 mins.

antonis
This is not your typical transfer thumb drive for simple file transferring, though.
It's actually a removable ssd-speed disk expansion. You can actually use it as a main boot / system drive for any mac you own.

Possibilities are way beyond a thumb drive as we know it.
Rating: 6 Votes

fiveainone
Thunderbolt 2?? I haven't even been able to use my Thunderbolt 1!
Rating: 5 Votes

The most expensive Thumb Drive on the Planet.


Also the fastest, by far. And at 128GB it's besides it's physical size closer to a regular drive.
Rating: 5 Votes

The most expensive Thumb Drive on the Planet.


No kidding. Thunderbolt 2? Does anyone have the first version at this point.
Rating: 5 Votes

GenesisST
I wish I could send that to my teenage self in the 80s... My mom would never have found my "stash"...
Rating: 4 Votes

milo
It's hard to imagine the pricing for this being announced by anyone but Doctor Evil.

Will it necessarily be that fast? I was under the impression that the bottleneck in most typical thumb drives was slow (cheap) memory that wasn't even as fast as the interface. Are there USB3 thumb drives that actually transfer half a gig per second?
Rating: 4 Votes
[ Read All Comments ]