Following a report earlier this week that suggested Apple's iAd staff would be responsible for securing advertising deals to support Apple's upcoming streaming music service, AdAge has confirmed the rumor and released new details on how the upcoming service, dubbed "iRadio," will function.

AdAge claims that iRadio, which Apple plans to offer to users for free, will incorporate both audio ads and standard mobile ads, all of which are highly targeted. Numerous reports on iRadio have suggested that Apple has tried to negotiate lower rates and more flexibility than has been offered to competitors like Pandora, leveraging its advertising reach and its iTunes store.

Selling interstitial audio ads – ones that play between songs – will allow Apple to offer the service free to users as is typical with most streaming music services. One music industry executive familiar with the negotiations between Apple and the major record labels said the terms of iRadio are more favorable for record labels than other streaming services because iRadio is expected to drive more song downloads.

iRadio users will be able to purchase the song they are listening to through iTunes. Syncing with iTunes Match ($24.99 per year) will allow users to own those songs forever, keep them in Apple's cloud-based storage service and access them on any iOS device. However, the service will not allow users to search for and play a specific song on-demand, like with Spotify.

While 70% of current iAd revenue is given to developers who utilize the service, Apple will be able to keep 90% of revenue from audio ads, sharing just 10% with music companies. Presumably, audio iRadio ads will function similarly to those offered by Pandora, playing in between songs. 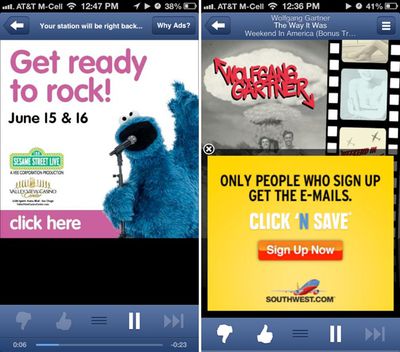 An example of the ads found in the Pandora app
Apple will also be able to charge higher advertising rates than competitors like Pandora, as Pandora's ads can only be targeted to users based on sex, area code, and listening habits, while Apple can target users based on several other factors, including entertainment tastes that include movie, television, and app preferences.

Last week, it was reported that Apple is considering launching an ad exchange, possibly within iAd, which is in line with the advertising information provided by AdAge. With an ad exchange, Apple could allow advertisers to target Apple users based on a number of data factors that Apple has collected about its customers. Companies like Google and Yahoo currently operate ad exchanges and an Apple exchange could greatly increase the popularity of its iAd program.

According to the latest iRadio rumors, Apple is pushing to complete deals with record labels in order to launch the streaming music service at its annual Worldwide Developers Conference, which is scheduled to begin on June 10.

We want FREE, not ads! We get ads on radio all the time!

So who exactly will pay for the music to keep it free for you? Nothing is ever free.
Score: 13 Votes (Like | Disagree)

ghostface147
I have never used a streaming service, but I think that not being able to find a song you want to play at anytime sucks.
Score: 10 Votes (Like | Disagree)

SilentLoner
If its not like spotify then im not that fussed about it tbf
Score: 10 Votes (Like | Disagree)

Dekema2
We want FREE, not ads! We get ads on radio all the time!
Score: 8 Votes (Like | Disagree)

another button for a service I (don't use) and won't be able to remove. I know I know, I can tuck it in to a folder, but I happen to be a neat freak :D
Score: 6 Votes (Like | Disagree)

HiRez
Can't pull up a song you want? Screw that. And I hope there is a way to opt out of ads for a fee?
Score: 6 Votes (Like | Disagree)
Read All Comments

Monday November 28, 2022 11:00 am PST by Juli Clover
Apple's upcoming iPhone 15 models will be equipped with Sony's newest "state of the art" image sensors, according to a report from Nikkei. Compared to standard sensors, Sony's image sensor doubles the saturation signal in each pixel, allowing it to capture more light to cut down on underexposure and overexposure. Nikkei says that it is able to better photograph a person's face even with...
Read Full Article • 133 comments

Monday November 28, 2022 10:42 am PST by Juli Clover
Apple has cut back on its Twitter advertising, according to Twitter CEO Elon Musk. In a tweet, Musk said that Apple has "mostly stopped" its Twitter ads, asking if Apple hates "free speech." Musk went on to publish a poll asking if Apple should "publish all censorship actions" taken that impact customers and he began retweeting content from companies that Apple has had moderation discussions ...
Read Full Article • 1325 comments