Earlier this week, we noted that Apple had begun in-store repairs of iPhone 5 displays, a $149 procedure that is part of an effort by Apple to revamp its AppleCare and warranty services.

We had been told that Apple had sent new equipment to the stores in order to allow Geniuses to calibrate the replacement displays once they had been installed, and 512 Pixels has now shared a photo of one of those machines installed in the back-of-house area of an Apple retail store.

From what I’ve heard, Apple Stores have been instructed that the iPhone is the “top priority” for the Genius Bar, and this new repair — and crazy machine — surely reflects that. In addition to the program changes, many stores have Geniuses that are dedicated to iPhone repairs for sections of their shifts. In short, Apple is pouring resources in to in-store iPhone repairs.

Apple's standard price for out-of-warranty iPhone 5 repairs is $229, so the new display replacement program may save some customers a bit of money and ensure that they receive their original devices back rather than receiving new units and having to restore backups onto them.

This "calibration" thing is a sham. Its not something that is adjusted. The display either works or it doesn't.

Have heard reports of many of these machines arriving broken or are breaking down easily. Good luck, Apple.


I'm interested to hear what you believe Apple's motivation would be to send non-necessary "sham" equipment out to their stores.

My friend who works there told me that the equipment runs several graphics tests on the display in conjunction with a real calibration app that pairs the display to the phone. It also tests things like the proximity sensor and ambient light sensor before it goes back to the customer.

If $149(from what I've read) is a competitive price and Apple wants to pay for equipment to ensure the best possible repair how is that a "sham", since by definition a sham is not in the customer's best interest? Where are they wronging people?
Score: 8 Votes (Like | Disagree)

tanousjm
Having worked in three Apple Retail Stores, and subbed in a total of seven or eight, I have NO idea how a machine like that will fit in the majority of stores. Aside from the flagship stores, BoH (Back of House) is extremely crowded. At one point during the fall rush, non-invasive Genius Bar repairs had to be performed in the already-packed employee break area.

EDIT: Hahaha, I now realize that my scale on this thing was WAY off. Oh boy. 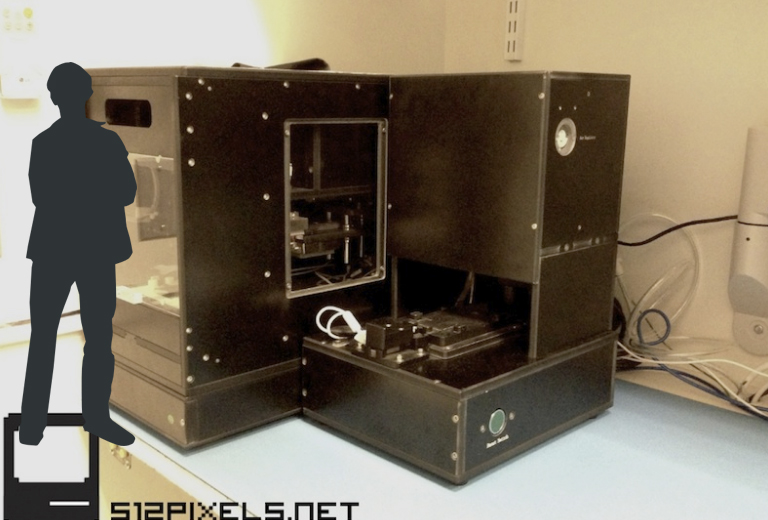 I didn't say the machine is a sham. The machine replaces the display, yes. But there is no actually calibrating anything. The LCD/digitizer is already made. It either works or it doesn't. The whole "needing to be calibrated" thing is just to make the customer feel like it is the only way to do it correctly.

All displays have variability in how they represent colors. You calibrate individual displays by using special hardware and software to create a custom color profile that can then be used by the OS to correctly map colors so that what's output to an individual screen looks correct to the viewer. Photographers, designers, and other folks who care about spot on color reproduction have been calibrating their desktop and laptop displays by using special hardware to generate these color profiles for years.

I have no insight that this is what Apple's doing here, but when I hear the word "calibrate" in the context of displays, this is what instantly comes to mind. I would not be surprised to hear that this new device has a step in the process where it generates a custom color profile specific to the new display. If that is happening, then yes, they would be calibrating the new displays.
Score: 7 Votes (Like | Disagree)

This "calibration" thing is a sham. Its not something that is adjusted. The display either works or it doesn't.


So you've used one. Must have if you know the machine is 'a sham'

So which store was it exactly
Score: 7 Votes (Like | Disagree)

bearbo
Haven't posted for years, but this is getting ridiculous.

Of course you can calibrate the touch screen. :confused:

How does touch screen work? The digitizer detects where your chubby little finger(s) touch the screen, and sending the OS the coordinates. If the digitizer was manufactured and mounted to the glass perfectly, then those coordinates would correspond to the correct location that you touched the screen.

However, if something was not perfect, for example, the digitizer is consistently telling the OS a x-coordinate 5% to the right compared the actual location of the contact, then the OS can compensate for that on the software level.

Calibrations (of the touch screen) could be done by having the machine "touch" the screen at a number of pre-specified locations, and detect where the digitizer "thinks" that the machine has touched, thereby producing a calibration map.

This kind of calibration has been done for decades on various types of touch screen, such as the likes of Wacom tablets.

Now, I don't profess knowledge of the working of this particular machine, but to say "once the touchscreen digitizer is applied to the glass/LCD, that's that" is laughable. Just because the general public cannot access the part of the OS that can report the raw data from the digitizer, and compensate for the difference, does not mean it cannot be done.

I figured I'd wake up to this storm. Haha. I think I've been a good sport!

BUT, I'm glad someone can pick apart what exactly I was talking about SPECIFICALLY relating to the touch screen. Nothing else.

As someone else stated, being in a background with dealing with touchscreens all day you kinda see one way. In my "world", when I think calibration, I relate it to people talking about the touch screen because I've heard it numerous times from uninformed people. Which I still stand by the fact that once the touchscreen digitizer is applied to the glass/LCD, that's that.

I was not talking about the display itself which would make sense, again as I have stated before.

ijohn.8.80
[idealism]About time that society as a whole got the idea that there is actually a limited amount of resources to go around and if we all wanna have our piece, this should be the norm for everything we buy. Repair not discard, that is.
[/idealism]
Score: 4 Votes (Like | Disagree)
Read All Comments