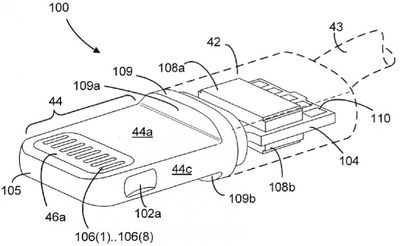 Perspective view of Lightning connector
The first application describes the hardware itself, while two nearly identical applications outline the adaptive technology used to assign pin functions. The only difference between the latter two applications appears to relate to one describing implementation on an electronic device while the other addresses its use on an accessory.

Example pin-out diagram of Lightning connector
As part of the hardware-focused patent, Apple shares several examples of implementations for the Lightning connector, including the Lightning Digital AV adapter, Lightning to SD Card Camera Reader, and even an as yet unreleased Lightning dock of similar design to the company's iPad dock for the first-generation iPad with its 30-pin connector standard.

Because having a giant pad on your desk to rest your phone on for charging is so much more convenient than a little plug, right? :rolleyes:
Score: 10 Votes (Like | Disagree)

LagunaSol
It's amazing how dismissive some people can be over what is literally a breakthrough connector design.

Has there ever been a electronic connector that accomplished so much in so little space yet required so little effort from the user?

Yet people are going to dismiss this as unnecessary, over-engineered, pointless?

Good grief. This company can do no right.
Score: 9 Votes (Like | Disagree)

I'm confused as to why the connector is so complex. The plug has eight pins on either side, but the jack only has eight pins on a single side. It seems that if the function of the pins on the plug were identical on each side, everything should work just fine. Even though the old dock connector had 30 pins (most of which were never used), I'm not sure what flexibility Apple is gaining by having adaptive Lightning connectors. I would think eight non-adaptive connectors would be able to carry all the needed power and data.


Because this is what allows the connector to work no matter which side you plug in. Probably my favorite feature of the Lighting connector. Nice little innovation IMO.
Score: 6 Votes (Like | Disagree)

redman042
I see that, for a lot of people, Apple continues to do nothing right. Now that people are bored of complaining about Antennagate, I guess this is the next best thing to whine about.

Yeah a connector change is a bit painful at first, and some people are still waiting for more compatible accessories. But Apple has always "skated to where the puck is going" instead of "where the puck is" and this is no exception. Other than being a robust, tiny, easy to use little cable, it's highly adaptable to future needs. For those who see this new connector as a big complaint, may I suggest you skip a generation and hang on to your 30 pin devices a while longer until accessory makers catch up and prices drop.

I've had the iPhone 5 since it came out, and I like the new cable. It's not a big deal or anything, but it's one more coat of polish on a great product line, and I expect the change to pay more dividends down the road.
Score: 5 Votes (Like | Disagree)