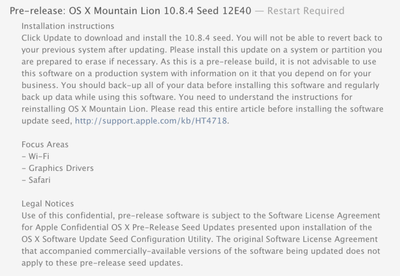 Apple continues to ask developers to focus on Wi-Fi, Graphics Drivers, and Safari.

The update is available through the software update tool in the Mac App Store and Apple's Developer Page.

Maybe 10.4 was supposed to be 10.3, but they were taking forever with 10.3 so they decided to actually release half baked thing.

Where do I get one of these magic seeds?

Maybe 10.4 was supposed to be 10.3, but they were taking forever with 10.3 so they decided to actually release half baked thing.


It seems like it's a bit late to be complaining about Panther and Tiger if you ask me.
Score: 8 Votes (Like | Disagree)

You are funny. You really are. Tell me why, exactly, is it a "problem" for computers to take as long as they need to in order to shutdown properly? You have intimate knowledge, I suppose, as to what the shutdown code is doing in the operating system. Well, do you?


Why does Apple kill the processes at 20 seconds rather than let them "take as long as they need in order to shutdown properly"? Here's a hint, because if a process or app has hung, it might never shut down properly without the OS force quitting it. Apple figures 20 seconds is a reasonable time to wait for a response before killing it.

Now, if your console log shows that every single time you shutdown certain tasks are crashing and requiring them to be killed, then waiting 19 extra seconds is useless since the records show they will not respond within the given time interval anyway.

I'm all for letting systems take as long as they need to shut down properly, and that is exactly why I'd like Apple to fix things so when I open up my console there are no error logs. Then we wouldn't have cause to complain about slow shutdowns because the system is doing whatever it is supposed to do. But when there are error logs pointing to specific tasks that are not shutting down properly, and the slow response has been shown to be caused by those specific tasks, you can't tell me there isn't something wrong with them and that everything is normal. Error logs are not "normal" behavior, they are there to help diagnose a problem.
Score: 6 Votes (Like | Disagree)

If you use Google you will probably find guidance that you can use to go through the system events that take place during shutdown.

Another newbie to the shut down "bug". Take your own advice and search the MR threads about it.

If you raised a help call with Apple, they would probably ask you to provide the event log.

We've been doing this for months. :eek:
Score: 6 Votes (Like | Disagree)

No, I don't believe anyone has suggested that. What has been suggested is that it is a 'universal' problem. Which it clearly isn't.


OK, you win. "Universal" means it happens on 100% of machines, which may not be the case. It's probably not literally "universal", more like extremely widespread. Still definitely a problem with the OS and not user specific though.

Yes the slow shut down does occur but there is a reason for that - it isn't a bug, it is operating as it was designed.


People have actually tracked what the system is doing during shutdown, and things are just hanging and the system gives them time to end before finally killing them off. Nothing useful is happening during that time, it most certainly is a bug. And by your logic, when 10.6 shuts down dramatically faster, are you saying there's something wrong with that? Or somehow both a 4 second and a 20 second shutdown are both "as designed" even though there's no advantage to the slower one?

Once upon a time, a man put some toast in his toaster. It took a minute to do its thing. And it provided lovely nice crunchy toast.

But then all of a sudden it took two minutes to make toast with the exact same result. And the man was a toaster sycophant and insisted that that was how it was designed to work. The end.


Fixed that for you.
Score: 5 Votes (Like | Disagree)
Read All Comments