Apple hasn't sold a notebook docking solution since the Duo Dock for the PowerBook Duo. However, a new campaign on Kickstarter has designed a new dock that can be used with any current MacBook Pro model, including the new Retina units.

The ZenDock connects to the Thunderbolt, USB, Gigabit Ethernet, and FireWire ports, while leaving a clever gap for the MagSafe power adapter to slide through. A single cable connects to a mountable base equipped for desktop accessories to be permanently connected to. 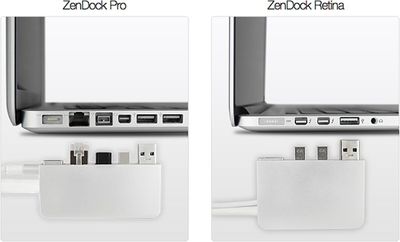 Our team of 4 has been developing ZenDock for just a year. About 4 months ago we tested the concept and the response was overwhelming and so we dove head first into creating our vision. We set out to build ZenDock with 2 design principles in mind. First was to build an elegant solution that would seamlessly integrate with your MacBook. Second was to build a device that just works, yet doesn't get in your way. Both versions always leave at least one USB, SD and headphone port accessible right on your Macbook, while allowing more permanent devices to be connected to the base. The ZenDock is CNC milled from solid blocks of ultra high quality T6061 aluminum, bead blasted and anodized to beautifully match your MacBook.

The ZenDock is available to Kickstarter backers starting at $109 for a limited early-bird backing price, though the company expects to sell the dock for $179 when it hits retail shelves. ZenDock expects to ship to backers in October of this year.

There are a number of Thunderbolt docks on the market that perform a similar function, but they are significantly more expensive -- though they do provide much more functionality. Sonnet has announced a dock with an internal drive bay and optical drive starting at $400, while Matrox and Belkin have announced their own Thunderbolt docking stations.

Im the creator of ZenDock. It has come to my attention some people may have been on psychedelic drugs while viewing our Kickstarter page. Please allow me to clear the air:


* ZenDock is the only dock for the Macbook Pro and Retina that allows you to actually dock with a single connection since it also holds your Magsafe power adapter.

* ZenDock is the only dock for the Macbook Pro and Retina designed to allow you to completely clear the mess of wires from your desk, by mounting the dock behind your desk.

* Many consider Zendock to have a much higher build quality and to better match the Macbook than any other similar dock due to it's high quality CNC'ed aluminum construction.

* Removing the ZenDock is easy, and does NOT require messing with any RJ-45 latch or other.

* The ZenDock Retina can support Firewire by using the Apple Thunderbolt to Firewire adapter, which you probably already own if you have a Macbook Retina and a Firewire harddrive that you use.

* The ZenBoxx team found that many users only wanted to connect a mini-display port monitor to the Zendock Retina base, and decided to convert that base port to mini-display port only since the cost savings would allow the ZenDock to be priced significantly less than any other Thunderbolt docks available.

* The ZenDock Retina optionally includes Ethernet via USB 3.0 (therefore not tying up the thunderbolt pass through).

* Zendock does not require an external power brick, and considered more portable than similar solutions.

* Versus one of the only close competitors with a product currently available the ZenDock has more USB 3.0 ports, allows you to connect twice as many monitors, doesn't require a power brick, matches its ability with audio ports, still has more USB 3.0 ports AFTER attaching the optional Ethernet adapter, and costs close to half as much if you get the Kick Starter special available at http://www.kickstarter.com/projects/coleflournoy/zendock-the-best-dock-for-your-macbook?ref=live

* The Zenboxx team is better at making websites then videos.

* The Zenboxx team thought they would be cool by taking odd camera shots.

* Unbenounced to Zenboxx, odd camera shots were in fact - not cool.

* Luckily the product kicks ass, and is currently the number 2 most popular Kickstarter project in it's category.


All in good fun people, I hope you enjoy the ZenDock, we truly think its the best solution out there for most (but not all) people.

For more info see our website at www.ZenBoxx.com or if you want to get the ZenDock cheaper and faster than anybody else, you can pre-order it for $139 on the Kickstarter page http://www.kickstarter.com/projects/coleflournoy/zendock-the-best-dock-for-your-macbook/
Score: 6 Votes (Like | Disagree)

The Retina one takes out two thunderbolt ports and only gives you one? It should at least include an ethernet port to make up for this


No, worse: it takes up 2 Thunderbolt ports and gives you one DISPLAYPORT. That's a major oversight.

With those Sonnet or Belkin Thunderbolt solutions you don't even really need a dock. You can just connect the one Thunderbolt cable, and you're done *leaving all the ports on your laptop free.

As did this (http://www.kickstarter.com/projects/1251721352/w1pps-the-cord-integration-solution-for-apple-macb). Not identical but in the same ballpark.

AbSoluTc
Nice until Apple refreshes the ports and changes the entire getup rendering the device useless.
Score: 3 Votes (Like | Disagree)

Nice until Apple refreshes the ports and changes the entire getup rendering the device useless.


It's pretty much the same for any Windows laptop.
Score: 2 Votes (Like | Disagree)

No, worse: it takes up 2 Thunderbolt ports and gives you one DISPLAYPORT. That's a major oversight.

With those Sonnet or Belkin Thunderbolt solutions you don't even really need a dock. You can just connect the one Thunderbolt cable, and you're done —*leaving all the ports on your laptop free.

Looks like they somewhat missed the point of Thunderbolt :/

you hit the nail on the head, thank you for posting!

many people miss the point of Thuderbolt, it acts a lot like the PCIe slots on a Mac Pro, a direct injection into the brain of your computer. it's backwards compatible with all previous connectors like FW and USB, and has plenty of thoughput to handle multiple instances of each, it's wonderful tech that often gets a bad rap from those without a clue! :eek:

anyway, those belkin/sonnet docks you mentioned take a single cable and in the end, turn it into what what looks like the back of a Mac Mini. :)
Score: 2 Votes (Like | Disagree)
Read All Comments