Alongside today's new marketing push to try to win back professional video editors, Apple has released updates for Final Cut Pro X, Motion, and Compressor. While Motion and Compressor have seen mostly minor tweaks and bug fixes, Final Cut Pro X has received a somewhat more substantial update including support for the new Sony XAVC codec up to 4K resolution. 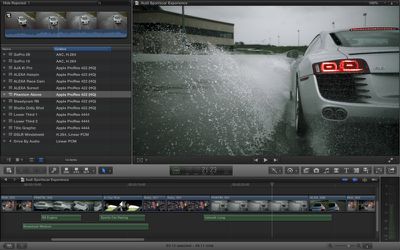 - Support for Sony XAVC codec up to 4K resolution
- Option to display ProRes Log C files from ARRI ALEXA cameras with standard Rec. 709 color and contrast levels
- Resolves an issue where some third-party effects generated green frames during render
- Resolves performance issues that could occur with certain titles and effects
- Time reversed clips render in the background
- Ability to use key commands to adjust Clip Appearance settings in the timeline
- Ability to view reel number metadata located in the timecode track of video files
- Mono audio files in a surround project export with correct volume levels
- Drop zones no longer reset to the first frame of video after application restart
- Fixes a performance issue which resulted from selecting multiple ranges on a single clip
- Fixes an issue where the Play Around function did not work properly on certain clips when viewed through external video devices

In addition to the updates for the core Final Cut apps, Apple has also released an updated set of ProApps QuickTime Codecs for Final Cut Pro X users.

nitro912gr
if apple really care about the pro users, they can show it with a new mac pro.
Score: 36 Votes (Like | Disagree)

cassiar
This is great news!

I can honestly say, after being initially skeptical at NAB when it was released, FCPX is the fastest NLE on the market. I can get to the heart of the story and really play around with the edit. It truly is the future of editing.

eric/
That's good. I'd like to see Apple focus more on it's pro users, and maintain that user base and product line.
Score: 25 Votes (Like | Disagree)

There is no future for Quicktime on Windows. Apple has discontinued it. There is no Quicktime X for Windows. So how will all the content generated from Apple products be delivered to non-apple platforms - e.g. the other 80% of the computing population? Do I really need to encode an H264 AVI and an H264 MOV going forward for every media file I want people to be able to watch?

And lets not even start about the cluster-F that is quicktimes color handling across platforms. Apple's insistence on not offering a mode where quicktime player doesn't touch color at all is infuriating when you are trying to deliver content to a wide audience. Quicktime puts a wash over the whole thing, and there is no silver bullet fix. So then you get things like the Blend/Straight Alpha workaround, which introduces aliasing in full screen mode, so now your color is better - no perfect - but your content looks terrible.

If Apple is serious about catering to professionals they have a lot of cleaning house to do. At this point they are the cusp of complete abandonment.
Score: 11 Votes (Like | Disagree)
Read All Comments