Apple today rolled out a new advertising theme for the iPhone on its website, highlighting a number of reasons why people love their iPhones. The campaign comes with all-new graphics, a new "Why iPhone" page, and an email promotion.

There's iPhone.
Then there's everything else.

The "Why iPhone" page shares a number of features and highlights of the iPhone, including its eight consecutive J.D. Power customer satisfaction awards, the attention to detail in the iPhone's design, the Retina display, battery life, powerful and efficient A6 chip, and more. 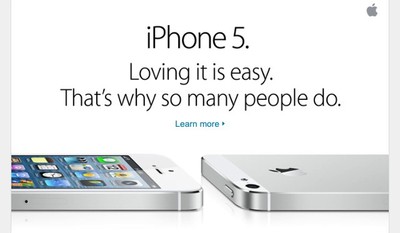 Apple's new campaign comes just two days after Samsung introduced its upcoming Galaxy S 4 phone, the next flagship model for the leading Android handset manufacturer. Samsung has stepped up its advertising over the past year, and former Apple ad man Ken Segall is just of many who have argued that Apple needs to counter Samsung's effort with more inspired advertising of its own.

Samsung has been scoring points for its "people-based" ads while Apple has been focusing on the experience of using its products, but Apple's new campaign appears to be trying to bridge that divide somewhat by focusing on how the iPhone experience has drawn so many loyal and happy customers.

Wednesday July 1, 2020 3:40 am PDT by Tim Hardwick
As expected, Apple's first MacBook Pro with a Retina display is now officially classed as "obsolete" worldwide, just over eight years after its release. In a support document, Apple notes that obsolete products are no longer eligible for hardware service, with "no exceptions." This means that any mid-2012 Retina MacBook Pro 15-inch models still out there that require a battery or other...
Read Full Article • 159 comments

Sunday June 28, 2020 7:56 am PDT by Joe Rossignol
iPhone 12 models will not include EarPods or a power adapter in the box, analyst Ming-Chi Kuo said today in a research note obtained by MacRumors. This lines up with a prediction shared by analysts at Barclays earlier this week. Kuo said that Apple will instead release a new 20W power adapter as an optional accessory for iPhones and end production of its existing 5W and 18W power adapters...
Read Full Article • 863 comments

Tuesday June 30, 2020 11:44 am PDT by Juli Clover
There's a new 'EvilQuest' Mac ransomware variant that's spreading through pirated Mac apps, according to a new report shared today by Malwarebytes. The new ransomware was found in pirated download for the Little Snitch app found on a Russian forum. Right from the point of download, it was clear that something was wrong with the illicit version of Little Snitch, as it had a generic installer...
Read Full Article • 124 comments

Wednesday July 1, 2020 1:57 am PDT by Tim Hardwick
Leaker L0vetodream this morning posted a tweet corroborating recent rumors that Apple's "iPhone 12" lineup won't come with EarPods or a charger in the box, adding that this will also eventually apply to the existing second-generation iPhone SE. L0vetodream also claims that future iPhone packaging will be "thinner" and "exquisite," which would make sense if Apple's handsets are set to come in ...
Read Full Article • 239 comments