Career site Glassdoor today released the results of its annual CEO approval rating survey, showing a four percentage-point drop for Apple CEO Tim Cook that resulted in a decline from the top spot in last year's survey to 18th in this year's version. Glassdoor's results are based on over 500,000 company surveys submitted by employees over the past year that ask whether they approve of how their CEO is running the company. Based on an average of ratings over the past year, Cook dropped from a 97% approval rating in the 2012 survey to a 93% rating this year. 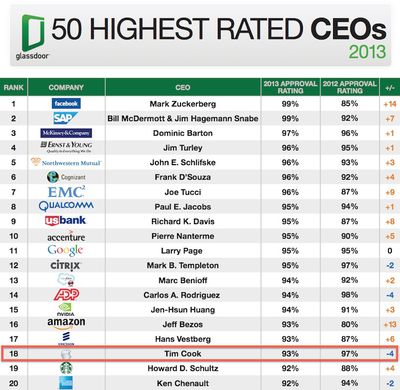 Facebook's Mark Zuckerberg surged to the top of this year's list, seeing a 14-point rise in his approval rating to 99%.

While Apple has continued to perform well financially since Cook's ascension to the CEO position in August 2011, the company's growth has been slowing in recent quarters and its stock price has declined by roughly 40% from its highs amid concerns over increasing competition and how well Apple will be able to tap new products and markets to drive future growth.

M-O
this ranking lost all credibility by putting zuckerberg on top...
Score: 18 Votes (Like | Disagree)

Porco
It looks like Mark Zuckerberg has a lot of friends who like him a lot since they joined him on  whatever his company is called  ;)
Score: 14 Votes (Like | Disagree)

ThunderSkunk
Well, a popularity contest of the worlds richest and most conniving, awful people you'd never want to spend time with. Handy.

Perhaps they could make one for elected officials as well.
Score: 8 Votes (Like | Disagree)

spyguy10709
From an investor's standpoint - he's a terrible CEO.
He's not unlocking shareholder value - which was excused under Steve Jobs because -
He's not a visionary like Steve was.
He's not a product guy.

He's a business man - and he's not a good one at that. His job is to pay back shareholders in value - either in stock price or a good dividend. Some people here hate shareholders because Steve did - and that's fine - but you have to remember that shareholders own about 60% of Apple, and they're pissed that he isn't doing anything to cause the stock to reflect Apple's real value (either by buying companies, giving money back to the shareholders, or buying shares back)
Score: 7 Votes (Like | Disagree)

Sunday January 23, 2022 10:32 am PST by Juli Clover
Apple is working on a number of new products that are set to launch this fall, and Bloomberg's Mark Gurman says that it will be "the widest array" of new devices that Apple has introduced in its history. In his latest "Power On" newsletter, Gurman explains that Apple is working on four new flagship iPhones (iPhone 14, iPhone 14 Max, iPhone 14 Pro, and iPhone 14 Pro Max), an updated low-end Ma...
Read Full Article • 251 comments

Monday January 24, 2022 9:20 am PST by Juli Clover
AT&T today announced the launch of upgraded AT&T Fiber plans, which support speeds of up to 5 Gigabits for some customers. There are two separate plans, one "2 GIG" plan and one "5 GIG" plan, available to new and existing AT&T Fiber subscribers. According to AT&T, the new plans are available to nearly 5.2 million customers across 70 metro areas including Los Angeles, Atlanta, Chicago, San...
Read Full Article • 221 comments

Monday January 24, 2022 7:12 am PST by Sami Fathi
Three months after their launch, the 14-inch and 16-inch MacBook Pros continue to experience high demand and seemingly short supply, with shipping dates for both models stretching into multiple weeks in several of Apple's key markets. In the United States, the baseline 14-inch MacBook Pro with the M1 Pro chip is estimated to ship in three to four weeks, promising an arrival by at least...
Read Full Article • 188 comments