According to TmoNews, T-Mobile is gearing up to introduce significant changes to its service in March, eliminating both contracts and early termination fees, along with implementing installment payments for its equipment. T-Mobile's move to end subsidies was confirmed by the company in late December.

-For starters, kiss contracts goodbye as T-Mobile moves to a no-contract world. Existing customers will finish out their current contract or upgrade to a new device without a new contract, whichever comes first. New customers won't have to suffer with any long-term commitments. Contract wise that is.

-Early termination fees will be a thing of the past as well, which makes complete sense when announced with the removal of contracts.

-Expect the introduction of a new equipment installment plan tier, likely in the $25 – 30 dollar range as T-Mobile moves to make all its smartphones $99 or less as down payments. A $30 tier makes sense if you consider the retail value of the device is $699 = $30 x 20 monthly payments.

Along with the service updates, T-Mobile is also expected to refine its brand image, with a focus on its "Dual 4G" HSPA+ and LTE networks and the retirement of its former "Stick Together" tagline. 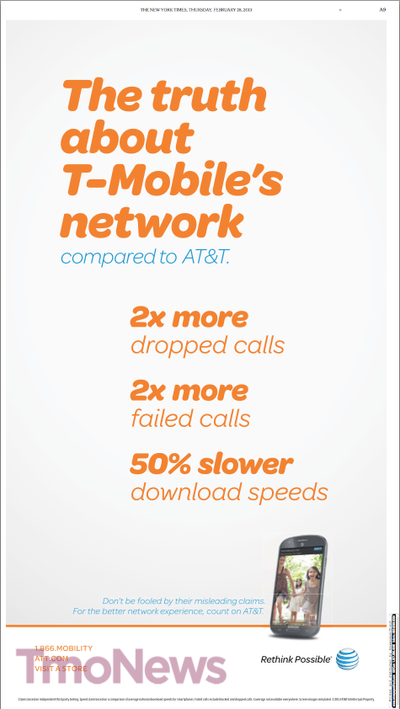 The attack is a response to T-Mobile CEO John Legere, who called the AT&T network "crap" back in January. The animosity between the two companies began after AT&T failed to purchase T-Mobile following objections from the Federal Communications Commission and the Department of Justice.

T-Mobile is the fourth largest carrier in the United States, behind AT&T, Verizon, and Sprint. Though T-Mobile does not currently offer Apple products, Apple has confirmed that it plans to offer its products via T-Mobile in 2013.

Tuan X
So AT&T was like “Yo, what’s good baby? I got all this bread & I’m willing to spend it on you if you be my b*tch.” Even though he’s slow & very shallow, T-Mobile was like, “Ok boo, let’s plan this wedding. But since you ballin’ & everything you gotta get me a crib, a new whip & a puppy.” T-Mobile knew these gifts couldn’t be taken back if things didn’t go well. So T-Mobile & AT&T planned their wedding, even though they knew their parents may not approve because AT&T is Jewish & T-Mobile’s Atheist.

Time goes by, they're about to get married, but their parents are like, “Get the hell outta here you’re not marrying a (Jew/Atheist),” they’re forced to break up. AT&T is upset they didn’t get their girl. T-Mobile is like “ooohhh, sorry boo. Thanks for the whip though.”

T-Mobile quickly meets another guy, Metro PCS, he’s an atheist too! He doesn’t have much money but he’s got personality & is goal oriented. T-Mobile falls in love. They decide they want to get married & oddly Metro PCS agrees to change his name to hers (you know she got an ego); but T-Mobile’s willing to let Metro PCS wear the pants in the relationship.

AT&T, jealous as all hell, starts talking crap about T-Mobile. “Ohhhh, whatever yo, that chick is slow. Forget her. Look at me I’m ballin’, she know she miss this!” Clearly upset because he realized T-Mobile was playing him from the start.
Score: 44 Votes (Like | Disagree)

FirePhantom
If T-Mobile's network is so bad, then why did AT&T want to buy it?

NutsNGum
I really detest the rise in negative advertising.
Score: 12 Votes (Like | Disagree)

Buduls
what a hell are drop calls, is that only american thing ? ...
Score: 11 Votes (Like | Disagree)
Read All Comments