Canadian firm Maya-Systems today announced that it has sold a group of 18 user interface patents to Apple. The patents appear to be related to Maya-Systems' work with axis-based interfaces in which documents and other files can be automatically grouped into timelines based on tags or other attributes and made accessible via the cloud.

"We dealt with a significant number of sophisticated buyers," noted Mathieu Audet, founder of Maya-Systems and patent agent. "We are pleased to have secured the transaction with Apple." "Our patents have been analyzed thoroughly by many potential buyers. We are confident that they are strong assets." 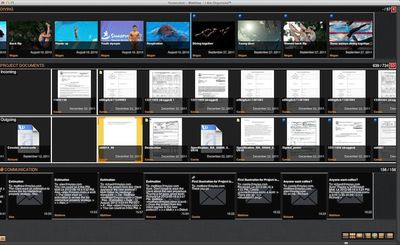 Maya-Systems' key product is I am Organized, a platform for organizing, viewing, and sharing files.

IamOrganized’s uniquely distinctive, patented feature is its axes-based interface. Intuitive and elegant, axes herald a new era in content management. They show and manage content more meaningfully than ever.

Unlike folder trees based on file location, axes group files by subject (any attribute, really) and display them along a timeline.
Scroll an axis to view more files. Zoom in. Zoom out. Navigate swiftly between projects by displaying several axes on your screen.

Attribute-based, orderly and relational, axes give users a meaningful and integrated view of their files.


It is not entirely clear exactly what aspect of Maya-Systems' patent portfolio Apple was interested in controlling, but Apple has been making a significant push into cloud-based document and file storage and sharing, including such features Documents in the Cloud and Photo Stream.
[ 77 comments ]

And always will. iCloud is awful and Apple apparently thinks users are too stupid to understand "files" and "folders" even though the metaphor was fine 30 years ago. However, in iOS, users are forced to remember which apps holds they document they're looking for... Ex. did I save that PDF into iBook or into DropBox?
Score: 15 Votes (Like | Disagree)

shurcooL
This is eerily close to what I've been preaching for the last year, but no one is listening.

The best way to store your stuff is all in one synchronized (and backed up, version controlled) place, say Dropbox. But organizing files inside by JUST folders is bad.

Instead, there should be labels or tags, similar to Gmail's labels. You can apply them to files/folders, and get different views into your stuff:

Folders are very limiting cuz each file can only be in one folder. What if it's both a picture, and a part of project A? Do I put it in /Pictures or /ProjectA? Apply both labels, problem solved.

iCloud currently sucks for contents storage cuz you can't see all your files no matter what app they're in, so it's easy to forget what you have and where.

I really hope something good comes out of this.
Score: 6 Votes (Like | Disagree)

Peace
A potential new coverflow view for the finder ?
Score: 6 Votes (Like | Disagree)

And always will. iCloud is awful and Apple apparently thinks users are too stupid to understand "files" and "folders" even though the metaphor was fine 30 years ago. However, in iOS, users are forced to remember which apps holds they document they're looking for... Ex. did I save that PDF into iBook or into DropBox?

30 years, yet some people still cannot grasp the concept of it or use it effectively. Ever see a person with a desktop full of icons? Great user-run file management there. I see this ALL the time at my office. Eventually for these people, it's going to be hell to find that file they were looking for. That's what I'm talking about.

Steve Jobs explained in either a keynote or one of the All Things Digital conferences: the learning curve for the average user goes way up once they hit the file system. And that's why Apple never implemented a user-run, traditional desktop file management system in iOS, and it's the right direction for iCloud still.

But it isn't like Drop box is going away for power users that love to hang around forums and talk about this stuff. The choice is still there. But I strongly believe Apple was smart to simplify cloud services for the mass market. I doubt it would have reached this number of penetration if iCloud was just another Drop Box.
Score: 4 Votes (Like | Disagree)
Read All Comments