Monday January 28, 2013 9:15 am PST by Eric Slivka
iLounge follows up its reports from last week about Apple's future iOS device plans with a new report sharing details on Apple's rumored lower-cost iPhone. According to the report, the new device will indeed be constructed primarily of plastic and offers design similarities to the iPhone 5, iPod touch, and even the iPod classic.

From the front, the new iPhone looks almost identical to the iPhone 5—the same exact shape, with the same sensor, camera, and button arrangement. The 1136 x 640 screen isn’t a surprise, but will be a nice step up in specs for the lowest-cost iPhone. Rather than making the display flush with the enclosure, as it was in the plastic iPhone 3G/3GS, the front glass sticks out a little, just as it does with the iPhone 5 and iPod touch. Despite the shift to plastic for the rest of the enclosure, our sources believe that Apple will continue to use Gorilla Glass for this model’s screen.

Differences become more obvious when the new iPhone is turned on the side. The circular volume buttons of the iPhone 4, 4S, and 5 will shift to elongated, pill-shaped designs closer to the iPod touch and iPhone 3G/3GS.

The device is reportedly about half a millimeter taller and wider than the iPhone 5, but also about one millimeter thicker. 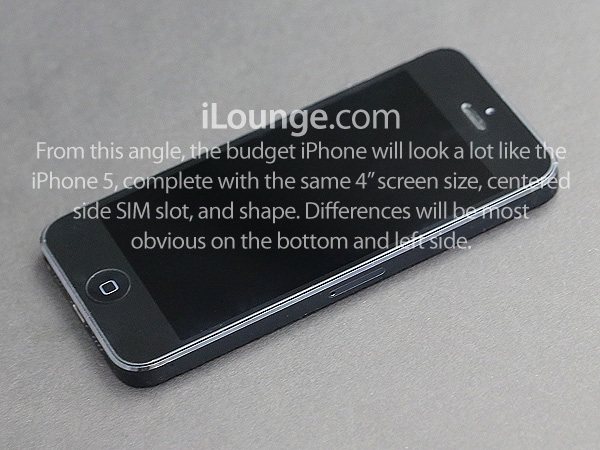 Similarities to the iPod classic are said to arrive in the form of the curves on the rear edges of the device. The report indicates that the sides and rear of the device will all be flat and connected by distinct curves rather than extending the curves all the way through the rear shell of the device.

Unlike the plastic iPhone 3G/3GS, which featured soft curves on all sides, the budget iPhone’s curves start and end at flat surfaces, so each side and the back are flat. This seems like a trivial change, until you realize that it allows Apple to use flat rather than curve-matched parts: the right side has a flat, centered SIM card tray just like the iPhone 5’s, while all of the buttons and ports are on flat rather than curved surfaces. A flat-backed iPhone won’t rock on a flat surface when it vibrates, either. 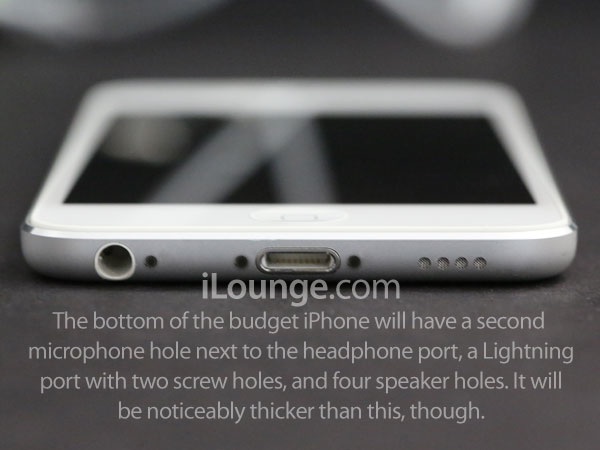 The rear and bottom edges of the lower-cost iPhone will reportedly be something of a hybrid of the iPhone 5 and the current iPod touch, with a the bottom edge showing a similar layout of features to the iPhone 5 but with fewer holes.

Apple has long been rumored to be working on a lower-cost iPhone, but rumors have accelerated in recent weeks with indications that the company may launch the device later this year.

daneoni
Am i the only one who thinks this is a waste of time? Isn't the 4S/4 more than sufficient for a low cost option?
Rating: 32 Votes

I don't understand this low cost thing. Isn't that what selling the iPhone 4 and iPhone 4S is for???


Am i the only one who thinks this is a waste of time? Isn't the 4S/4 more than sufficient for a low cost option?


Apple is currently selling the iPhone 4 for $450, and the 4S for $550. That's not low-cost for countries where carrier subsidy isn't an option.
Rating: 29 Votes

Razeus
I don't understand this low cost thing. Isn't that what selling the iPhone 4 and iPhone 4S is for???
Rating: 22 Votes

Jarrodbcall
This actually makes total sense to me. By replacing the 4s with the budget phone, Apple is able to make a complete transition if screen size. All phones being sold will be 4", which will let them utilize the space in the upcoming ios update. Maybe they will incorporate the taller app switcher that has been floating around?

Also, it would complete the change to the new charger/synch cable. The consistency may be worth any extra RD costs.
Rating: 16 Votes

canucksfan88
the 4 and 4s are not "low budget." they are only $0 or $99 because of carrier subsidies. you buy them outright or out of contract they are still $499ish

Wilson1313
I call BS. If they are still using the retina screen, A6 Processor, dual cameras, LTE, etc. then the cost savings for the outside shell are going to be negligible for a low cost version and will not be worth the R&D rather than just selling the previous model, which they have to get rid of anyway.
Rating: 13 Votes

ElTorro
Does it matter what the back side is made of or what it looks like? Most people will put the phone into a big plastic case anyway.
Rating: 12 Votes

onthecouchagain
If this turns out to be true, what will the naysayers do? The ones that said "Apple does not and will never deal with lower end iPhones"?

Their worlds must be crumbling. :p

And I wonder what the unlocked price of these will be...
Rating: 12 Votes

Apple is currently selling the iPhone 4 for $450, and the 4S for $550. That's not low-cost for countries where carrier subsidy isn't an option.


This is exactly the reason for the low-priced iPhone rumor. Too many here are U.S.-centric believing that a $0 iPhone 3 is the lowest price possible. But only people like us Americans can be so easily fooled into believing there is such a thing as a "free" phone or a "cheap" phone when we are then signing up for a 2-year fee tail for "service".

The world is different. And with some U.S. carriers looking to move away from the hardware subsidy model, maybe we're finally going to at least consider doing the same. It is almost always the best deal to pay up for the phone and get a cheaper cost of service than buy into the illusion of a "free" phone.

That said though, I still think the spin that a plastic back is going to make much of a difference in cost is silly. Aluminum is not an expensive metal and yes I'm also considering the milling, etc too. A genuine cheap (non-subsidized) iPhone is going to have to make some meaningful cuts to the guts too.

And $299 or $450 is too high for a "cheap" phone. If the goal is to be very competitive on price, Apple needs to be genuinely competitive on price. A premium, cheap phone is not a sensible combination of adjectives. Yes, under $299 means it probably kills the iPod touch. Or maybe this is the next-gen iPod Touch that includes the phone hardware? "But that would kill the iPhone." Cannibalize yourself and make money or let other cannibalize you and take (your) money.

Is any good Android under $299 without a contract? Maybe this will be a product exclusively for emerging markets... like certain high(er) MPG cars priced below near-US-model equivalents and only sold in certain markets where American pricing would never sell?
Rating: 11 Votes