Twitter has updated its Tweetdeck client with a number of new features, including the ability to get Tweet embed code straight from the application, a new predictive typing feature, and "performance upgrades for displaying multiple high-velocity columns". 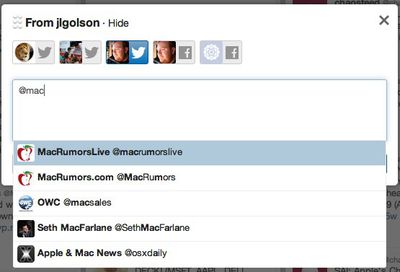 Reports The Next Web:

The update includes changes made to the Chrome version of the app before Christmas, and one of the most visual changes is the addition of ‘typeahead’ when searching, to offer predictions for what you’ll be writing. This also acts as a people search, giving you a list of accounts in your Twitter community that match the text entered.

Twitter says there have been more than 90 fixes and updates from the prior version and Twitter power users may want to give the updated app another look.

Twitter says there have been more than 90 fixes and updates from the prior version and Twitter power users may want to give Tweetbot a look.

rmwebs
Who actually still uses Tweetdeck? When they sold it to Twitter it turned into a pile of crap.
Score: 3 Votes (Like | Disagree)

bigjobby
I'm sticking to the pre-Twitter owned version unless someone convinces me otherwise.
Score: 2 Votes (Like | Disagree)

I think he's referring from the outgoing links. Mac rumours uses viglink which converts all outgoing links to tracking links with affiliate code embedded in them.

It basically means if viglink can pick up an affiliate program for the site macrumors links to, it makes both viglink and macrumors money.

Not really, he was just so busy trying to take a shot at MacRumors for earning revenue he forgot to actually make a coherent point. It's a free update for a free application.
Score: 1 Votes (Like | Disagree)

I'm sticking to the pre-Twitter owned version unless someone convinces me otherwise.


While I liked the additional options of the old version much better, there are some reasons to goto the new version. First and foremost being that the new version offers live streaming rather than the constant API calls which limit the number of updates, messages, replies, and DMs per hour. Also there have been a number of security fixes since then. Additionally there are better search and other features at this point.

Does suck that many of the more advance features went away when Twitter bought TweetDeck.
Score: 1 Votes (Like | Disagree)

calsci
Now where is the update for Twitter for the Mac?
Score: 1 Votes (Like | Disagree)
Read All Comments